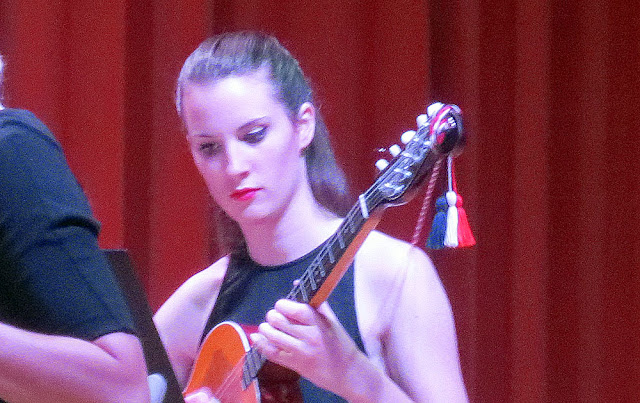 Let us start with the not unreasonable question, “What is a tambura?” Well, I think I know, but let me Google that for you.

“The tambura is a stringed instrument that is played as
a folk instrument in Macedonia and Bulgaria.
It has doubled steel strings and is played with a plectrum, in the same manner
as a mandolin.”

We are on a role so, let me Google KUD Dobreč, tonight’s performers. 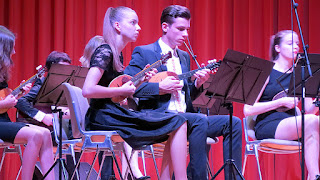 Simply, this 24 piece comprises
young musicians from Slovenia and is among the top tambura orchestras in Europe. They
are a professional orchestra formed in 1997 and have 600 + performances in the
bag and many awards to boast of – as they should boast – they are excellent. Tonight their programme extends from Bizet and Rossini through to Morris Albert (yes, “Feelings”) and David Lee Roth’s  amalgamation of “Just a Gigolo/I Ain’t Got Nobody”.

Details of other concerts at LakeBledNews.com

From the Festival Hall in Bled,
let the music play.As they take the stage you can see that the tamboura comes is several sizes and shapes, from the mandolin-like smaller instruments, but with longer necks and six strings, to the small and large guitar-like instruments played à la mandoline rather than guitar. The combination of sounds is immediately arresting. Yes, the sound is like mandolins but with a fragility and a softness. 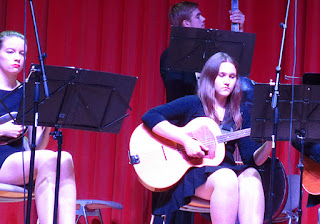 The first part of the programme
consisted of many “I don’t know what it’s called, but I can di-di-li the next four bars” tunes. Tchaikovsky’s
(or Čajkovski’s – a much more sensible spelling) Romanca, Bizet’s Carmen and even Khachaturian’s Sabre Dance, which is just a perfect piece for these instruments. At a guess I would say the music that inspired Adam Khachaturian was played on instruments like these,
This orchestra of 24 young people conjured up atmosphere’s and themes perhaps they themselves were not even aware of. Imagination took musical threads from Grenada and Seville, to corners of the
Ottoman Empire  via the Steppes and Cafe de Paris and somewhere on a Mediterranean island where there is a third man … probably called Zorba. This is a European music – as European as anything from Vienna, Salzburg, London or Paris.
The second part of the concert comprised mainly songs from Gašper Mihelič and Anja Peselj. At this stage the orchestra became accompanists. The audience – who had turned out in numbers many dressed in while as the is also White Night in Bled – clearly enjoyed every moment. 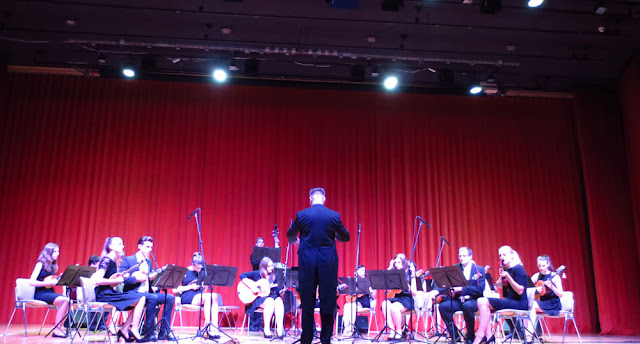 This was a very enjoyable concert by highly accomplished musicians playing beautifully together.It was a rewarding way to spend a Saturday night. And when the orchestra are in full swing, this is Festival.

If you would like to get an idea of the concert, there are several video clips of KUD Dobreč on YouTube, but below is a longer piece.