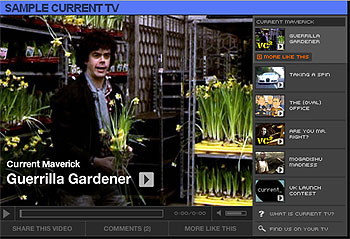 I’ve been talking to people about the US version of Current TV since I came across it over a year ago.  You’ve probably heard it was launched in the UK yesterday.  It’s highly interactive combining TV, web, Viewer Created Content (which they call VC2, significantly cooler than our "UGC") which forms one third of the output – and this is not YouTube standard; it is broadcast standard. There are even viewer made adverts.

The web previews films, and the audience – who can sign-up and become active members – can vote a film on to the TV, essentially "Green Light" it.

It might not be the future of all TV, but I expect it is going to be significant particularly among younger audiences who have on their home computers all the software they need to produce high quality video.