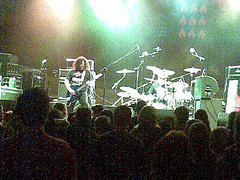 Large fat middle-aged men should not be allowed to pogo … by law. I know this goes against my instincts that people should be allowed self expression – but all that weight, unpracticed since the 1980s at the latest well it’s frightening.

Stiff Little Fingers topping the bill was only part of the reason Dawn and I went to the Ulster Hall on Friday 9th March. Adam’s band The Dangerfields and Shame Academy were doing support – that’s significantly more important.

I can’t remember the last time I was at a gig in the Ulster Hall, but thinks have changed: you can buy a drink – but you can’t smoke a cigarette. And everyone was so polite (apart from the Big Fat Middle-aged Pogoer beside me).

Now Brian Young (ex-Rudi) and Greg Cowan (ex-Outcasts) are my rock and roll heroes – so an evening of Sing-a-long-a-Rudi-and-Outcasts was just the thing. Oh, how we sang, "Big Time" and "Just another teenage Rebel" (which I think pre-dates SLF. Pretty sure Outcasts released their singles in IT records before Inflammable Material). How we joined in the haunting chant "SS RUC". That says something about the enduring nature of the Punk movement, I guess.

The Stiffs? Tight, loud, honed even polished. So half an hour of that was good enough for me.

From the stage Adam reports leads of 16 year old girls singing along to the Stiff’s songs. But enough was enough. After two hours standing, I was crook backed and knackered – so early retreat. Waving goodbye to other former rockers who have more stamina than me; Henry McDonald from the Observer, Seamus O’Neill ex-Bank Robbers and Tim MGarry (Da).

The concert seemed timely – if not fitting. During the bad old days of the Troubles, a few Punks kindled a spark in the general gloom. Thirty years ago we were going through a collective hell not knowing how it would all turn out. Punk in Belfast was anti-sectarian and anti-violence. While big campagnes were being waged in Britain in projects like Rock Against Racism were getting masses of publicity, Belfast punk bands did more by just turning up at the Harp or the Pound and just playing.

9 March 2007 was also the day that the results of the Assembly election were announced. The Pound, The Harp (and the Trident in Bangor – to quote the song) have gone – as has the punks favourite police force – the RUC. Yet the final negotions are not – quite – complete.

So Alternative Ulster – are we there yet?

We punks have grown up – we’re all middle aged now – and most of us overweight but still inclined to pogo – enen though it’s not good for our knees or our neighbour’s nerves.