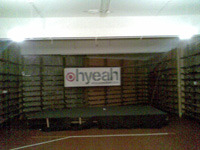 The recently opened Oh Yeah headquarters in Belfast’s Outlet building is an impressive space.  I was invited to be part of a panel talking about giving music away:

In May Irish Band The Crimea became the first band to give away an entire album for free digitally, has it worked? The issue of intellectual property over routes to market will dominate the creative industries over the next decade, we talk to some of the main players: Davey McManus – The Crimea, Davy Sims – Editor in New Media (BBC) and others.

It was my first visit to the building which offers three floors of warehouse space plus (potentially) a roof garden area.  Stuart Bailie showed me and Adam around pointing out not only what was there (studio, office, lots of space) but what was planned. 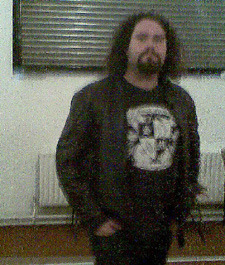 Outlet was a record label in Belfast (the linking URL is a redirect to a different site). It specialised in "Country and Irish". I remember one arguing with the owner (this would have been late ’70s or early ’80s) of the label that this new loud brash music coming out of Belfast was the future of music from this island.  He argued against.  I’m not sure if either of us were right.

The Outlet building is no longer home to what was once the solid reliable country and Irish.  It’s now a place for experimentation and dreams and planning for the future.

So, it took a generation or so before my argument came to fruition. Although we were talking last night about digital distribution of music and how it can be given away through virtual communities and social networks on the internet, the final point I made was that it is having a physical space where people can meet, talk and share is essential and in many ways more important than a life on-line.  And it’s a tribute to the visionaries and deamers who have turned an old Belfast record warehouse into a "big idea" for Irish music.

Watch a video about the place here (real media player);