I’m Blog sitting for William Crawley this weekend over at BBC Blogs:

The hardest thing about being a travel journalist on the radio (one of my many previous jobs) was finding people in the countries you visit to interview; distance, language, planning and this was before 1) general use of email and internet and 2) wide availability of mobile phone.

I was thinking about my first assignment in the early hours of this morning. I was in Istanbul for a few days. It was about 12 or 14 years ago. Later I was to learn how to begin setting up contacts in far away places, but for this one I was on a tight rope with out a safety net. I had literally nothing set up. For the early part of the first day a City Guide gave me my first interview looking over the city from the British Council. Although I was new to this, the last thing I wanted my report to be was an official interpretation of the city from someone employed to do that. I was after character and story. As we wrapped up he said he was a Christian and that I might be interested in meeting his Parish Priest – and Irish Man and minister of the Anglican church. Now, that was unexpected.

Numbers were exchanged and arrangements were made and I was to follow directions to the church on Sunday morning before the first service. I don’t know what I was expecting, but in one of the oldest parts of one of the oldest cities in the world I wasn’t expecting what was what appeared to be an English country parish church. It was built in 1858 and designed by GE Street who was also the architect for the Royal Courts of Justice in London. Christ Church, Istanbul is not difficult to find. If you are ever in the city …

The Parish Priest was a Church of England minister originally from Dublin. By co-incidence the church found itself in news in January this year. 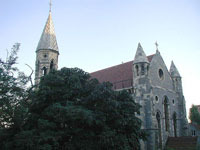 The congregation was remarkable in their diversity. This Anglican Irishman was parish priest to English people from the nearby British Council and British Consulate. Turkish people from around the city and further away, Tamils from Sri Lanka, and refugees from the first Gulf war who had crossed from Iraq to find safety in Turkey and more especially this church building. They had come to find refuge there and according to the minister began to do repairs to the church.
Among them – Rev. Sherwood told me, were Chaldean Christians. Never heard the name before.

I probably have heard it since and certainly did hear it early this morning on the World Service .

The full report about the Istanbul visit is here.