It’s a shame that NIRSucks.com has gone.  It was a long-gurn blog about being forced to use Northern Ireland Railways (NIR) and the transport company’s short comings.  But NIR doesn’t quite suck so much anymore.  Long gone are (most of) the noisy, smelly, cold, draughty, damp, toilet over flowing carriages that we used to travle in.  Pulling down the window to open the carriage door from outside then banging against the door with full force caused me several bruised ribs. 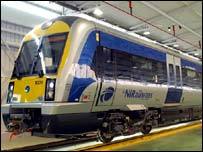 The trains (tend to) run on time.  The staff are professional and polite.  So NIR is better than it was.  Now they are planning to buy new rolling stock (I believe the technical term is) and they are surveying the customers.

What can we expect in the future?  Wireless and electric sockets! It’s almost the 21st century here.