The week in WIMPS

At the beginning of the week Marc, DebsA and Davy headed to Armagh to see the Driving Change Team. Driving Change is one of Public Achievement’s projects. We were there to talk about making a short video about extricating people from car accidents – they have some great heavy duty cutting and spreading kit there.

It was also Marc and DebsA’s first time behind the wheel of the WIMPSMobile. Ian from Driving Change says the best route from Belfast was via Loughgall – we are still not convinced, Ian.

Shauneen, Grainne and Niamh F were on Radio Ulster’s Talkback as part of a panel from the Pensioners Parliament in Belfast.

You can hear that here for another few days.

Meanwhile at the Pensioners Parliament, Matt, Kevin and Jenna were recording for a short video of the event from the Age Sector Platform. 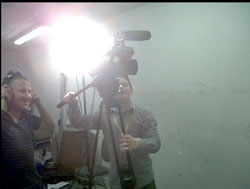 While the UK’s media were at Stormont Castle to see David Cameron, we were still waiting for Number 10’s Press Office to call back with our invitation (come on guys – some manners please!). Karen headed off to Belfast City Hall to speak to some people who didn’t think PM Dave’s economic ideas were to their taste.

We’ve been getting our IT system re-organised (ahem! fixed) and work is beginning on the second floor room – we’re planning a training room and drop-in café. That should be ready in just a few weeks. Here’s how it looks now. 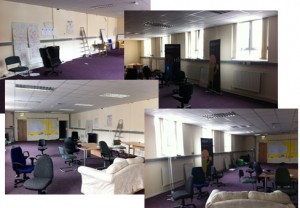 We’ll need to hold on to that old sofa though.

We are beginning to plan some campaigns over the summer including Votes at 16, punishment attacks, shared future and young people suicide rates.

Liz lost her phone — keep an eye out folks.

With the New York trip on the horizon it’s fundraising time. The Crew are throwing around ideas just now, but soon we’ll be asking you to dig deep, people.

So, it’s Friday now and Shiv and Tom are expected in shortly to grab a video camera. They’re going to be in Belfast city centre to pick up some of your thoughts on recent events.

This time next year there will be lots more Crew all over Northern Ireland out on a Saturday testing the mood of young people.