No, I’ve not been there, but Peter Day from BBC World Service showed me around at 4.30 this morning. (Listen here.) 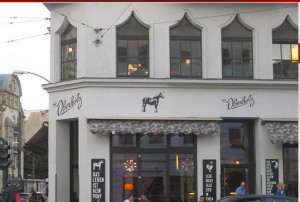 If you have not heard Global Business (BBC World Service) or In Business (BBC Radio 4), then I recommend them both with knobs on especially if you are running or thinking of starting a small business in the tech industry.

The Berlin tech hub start up is inspiring. But why is it happening in Berlin, and what can we learn from it?

Simon Redfern of Tesobe has lived in the city for 8 years.  He says it’s cheaper than UK, there is good electronic music, a good start-up environment (artists, tech guys, cheap spaces, co-working).  There must be more – that could describe dozens of places.

Felix Petersen CEO and co-founder, Amen. “Amen is the place for creating and sharing opinions about the extra ordinary things in life.” says the burb.

Felix sees the absence of Government as a spur to the development of tech Berlin. When the wall came down, a vacuum was created. There was no plan for Berlin. It was left without a purpose. The Berlin tech hub is precisely not the result of policy makers or government investment. “Give people playgrounds” seems to be his call to action.

Zoe Adamovicz Co-founder, Xyologic  adds to this – “After the wall came down, the city was almost bankrupt.” The city is like a start-up, she explained.  There was no industry, no jobs, there are two universities, cheap office space, and adventurous people came to the city. “You can be an artist, a student or an entrepreneur. If you are creative you create a start-up.”

The industry is very ideas and program driven. Not thinking about profits yet. Some businesses seem to be looking at aggregating users and selling on the whole package.

“The creativity of the engineering talent.” says Carsten, At the core of almost every start-up are a number of brilliant and creative engineers who are willing to beyond the beaten track in order to come up with something new and disruptive and innovative.” But he also pointed out that the big industries also attract the same people. So the talented engineers have to be offered an alternative.

The Berlin tech hub is not all about Apps. Amen is an app. Movie Pilot isn’t, neither is the search engine Xyologoc (although it finds apps). Read Mill is a social layer on e-books. Brilliant!

Underlying many of the businesses is selling data mined from providing a service or entertainment.

You can hear the programme any time here.

And find out more about TechBerlin here.