Welcome to Holywood where we play the game “Where shall we go to eat?”

Like many people visiting the town, I have often been struck by the number of places to eat or buy carry outs in Holywood. Not that – I haste to point out – I am a visitor. In 2009 I wrote a short blog post and from memory counted about 33 restaurants and carry outs, cafes and coffee houses. In the follow up in 2011 there were about 30 places. To qualify, an eatery must provide food to eat in or carry out. Bare minimum, a warm sausage roll or slice of cold quiche. So more than just restaurants and coffee shops qualify. Essential question “Can I get lunch or dinner here?” I have not included four or five vacant places. Work is being done on some of them and you can expect at least two new places by the summer holidays.

As I live in Holywood (it’s a Sims town)  there is no way in the world I’m going to do reviews. Here’s why:

But for the first time, I will point out some of my favourites.

If you don’t know Holywood this fact should be kept in mind. I am talking about (mainly) High Street – 530 yards of food outlets. Blindfold someone, dump them on Holywood High Street and they will find a cappuccino in no time at all.

I have organised the town into several areas. Starting with The Top of the Town (a phrase locals have used for generations), defining it as the area from Ean Hill to Sullivan Place.

Top of the Town

The newest restaurant in this quarter is The Indian Ocean replacing the once very popular Bokhara (Indian restaurant and carry out). It is a very attractive welcome into the town for people coming from the Belfast direction. It is both a restaurant and carry out Unfortunately it is opposite the eyesore the Oriental Kitchen (can no one do something about this disgrace?) which has been closed for years,

The famous Bay Tree (coffee, lunch, cinnamon scones) and a carryout  Go Bay Tree are a big favourite of locals and visitors alike. You will find them in the entry opposite the police station. The almost adjacent Coffee Yard is a very popular restaurant/cafe/diner which has earned a great reputation. Bigger than most of the restaurants in Holywood and on two floors, It is almost always busy. I do like it, but it is not my first port of call.

Then you have the choice of two pizza places: Holywood Pizza (my favourite) and Pizzini.
Subway is one of the few “chain” eateries. There is a second Indian carryout New India.

And we haven’t even reached Sullivan Place yet where there is only one restaurant,
not open at time of writing. The Anchorage – according to its Twitter profile is “a new seafood restaurant opening in the centre of Holywood. Serving fresh, locally sourced seafood.” By the time it opens I will have gone to live in Slovenia — honest!

Mid-Town – Sullivan Place to the May Pole

Back onto High Street and there are a number of places abandoned,

closed and deserted. The Streat lasted a few years and is gone as has its successor. But let’s dodge down Hibernia Street for some great food. My favourite Fish and Chip shop – which also has a fresh fish shop attached. The Ruddy Duck Fish House is by far my favourite chippie (fish cakes hmmmm, and what is that sauce?). I know of people who travel here from Belfast at lunch time to enjoy the very best chips and selection of fish. Owned by the Dirty Duck (below) with the same high standards, you can carry out or sit in. 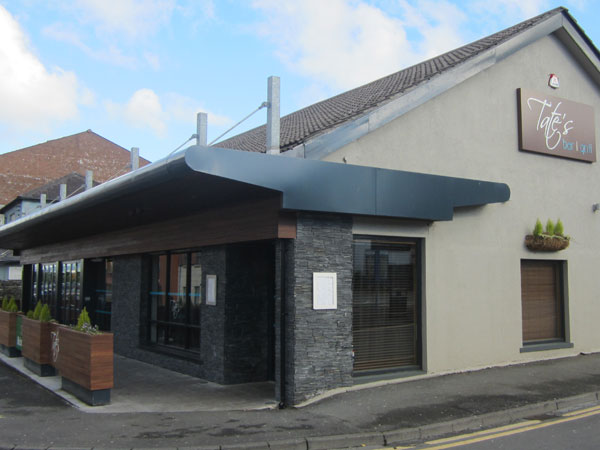 Newish to the town is Tate’s, a good bar and restaurant where once the Railway Bar stood (and back in the 1960’s Gerry’s). I had a very good lunch just after it opened.

With Ventnor’s sandwich bar up towards High Street again. One of the newest additions to the High Street is the third pizzeria. Established first in Belfast, there was a certain amount of excitement and anticipation when it was announced Little Wing (yes, like the Hendrix song) was coming to town. It is reputed to make the best pizzas in Northern Ireland. I’m yet to test that.

Let’s stay on that side of the road – there are a lot of outlets to name in mid-town. Let’s stop at Skinners for a moment. This is one of my favourite places, but I don’t get in too often. A good home bakery and a great cafe in the back with only a few tables but a great place for a first class old school fry up. I think I’ll sneak in sooner rather than later.

Update: In the first version of this I missed Georgia’s and Sutton’s chip shops. Now rectified. And finally on this side of the road in mid-town, Holywood, the Whalley Cafe and Gallery.

Opposite, and disappointingly one of my favourite spots, Wine and Co has closed, As I write the interior of the building is being renovated. I was also disappointed when The Coffee Emporium closed. Until Homebird opened. Homebird is my top spot. Fantastic staff, coffee, food, ambience. Please avoid around 11:00 on Saturdays, because sometimes I can’t get a seat … although I won’t be around Holywood from June to December – so, fill your boots.

Fontana, a long established high end restaurant is there next to Homebird. Let’s go down Shore Street and up Church Road for some hidden gems, like The Iona which has been there for decades and quietly gets on with excellent cooking and a quiet atmosphere. Paninni’s next door has been established in Holywood for quite sometime. Ownership has changed over the years as has the menu themes. Now a pizzeria but very popular in the morning for coffee.

Finally here Knott’s qualifies as it is a bakery (possibly the best sausage rolls) and the Golden Rainbow Chinese carry out opposite Knott’s. and bakery and the tiny Loganberry. It is also where you will find my favourite Asian/Chinese restaurant and carry out. The Koi has a great atmosphere and staff and the carryout is very reasonable.

The final run of restaurants, carry outs and shops where you can buy ready made food is between the Maypole and Johnny the Jig. Let’s call that :

The new-isn Asian Legend (Chinese), the long established Ganges (Indian) and Lapamanzi (coffee/lunch) are side by side and a few yards down the the new (Chinese/Asian) At28.

Opposite are Tesco and the new butcher shop Corries which both do carry out lunch. The The Holywood Fish Cafe; carry out and sit in.

Finally on this calorific caper. another personal recommendation is Coast, a family run restaurant with good food, a big, diverse menu and attentive staff. What more do you want?

I make that 39 places to eat in or carry out from in about 500 yards. With at least one more about to open and a second being refitted. But it would be a major omission to exclude The Dirty Duck. It is in Holywood, and in many ways set apart from the rest. So that’s 40 places to help stave off hunger with at least 2 more to come.

I think that is all. If you have any to add, please use the comment section.

My thanks to Heather Herron and Ivan Corrigan for comments which I am adding here. Also apologies for removing the original comments. I had been testing the Facebook plugin for comments and it just doesn’t look good, so I am unplugging it.

Here are their suggestions in full:

Heather Herron · Dont forget E HERRON & SONS do some lovely take away sandwichs,salads, burgers and hot dogs too with a lovely whipped ice cream to wash it all down 🙂

Ivan Corrigan ·Hello Davy / Ivan (Corrigan ) good speaking to you few weeks back , what about Rayanne House” on the Demense Road it has been here for years. Ivan.
I didn’t realise Herron’s (Church Road opposite the Iona) did takeaway food, so there’s an addition.
I know Rayanne well. In fact I knew the original Ray and Anne. Fantastic place and being on Demesne Road a hidden gem. I suppose the point of the blogpost is that I was drawing attention to the number of places on High Street. But yes, the Rayanne is in Holywood and at a stretch I could also add The Cultra Inn and the Culloden Hotel.
So that’s 44 places with – I’m told Johnny the Jig’s and the Anchorage on their way. I’m going to have to recount!
MEANWHILE ON TWITTER

we loved @davysims article yesterday! we hadn’t counted in a while and WOW really?! #placetobe http://t.co/o4QiczqaJy

@davysims @BangorHolywood @HolywoodChamber I’m guessing 37? I had this conversation recently, amazing how many there is.