The Bled Film Festival didn’t end with a bang or a whimper – something more closely related to a sigh of relief.

It was the oddest awards ceremony I have ever attended – and I have attended quite a few, and won in a few as well. And like you I’ve seen plenty on TV. But this was in the proper sense of the word – unique. In a later post I will reflect on the festival and tell you about some observations I have kept to myself, but for now let’s stick with the awards.

The Audience
There can’t have been many more than about 50 people there. No glitz, a little glamour, no excitement, no anticipation. Like every event I attended or saw photos of, there was a lack of what film and events and festivals are all about; people, audience, participants. Festival Hall holds – I am guessing now – upwards of 500 people. We few were scattered about the first 10 rows. 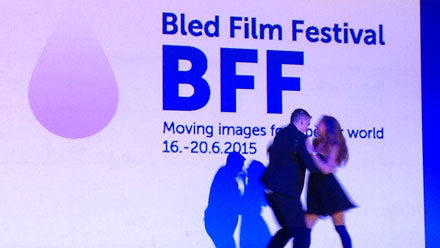 Good start
“Singing in the rain” through the speakers and a single dancer leaps onto the stage! Looking good! Not Riverdance but a very nice touch. He brings on a dancing partner and they take a few steps together and before you know it, it’s all over. Oh, well. It was a good start.

Let me make this point before I go on any further. This event was held in Slovenia where people speak Slovenian. And it is right and propper that the proceedings were carried out in Slovenian. I have no problem with that. I was possibly the only person in the room with little or no Slovenian. But this is billed as an “International Festival”, so throw us a bone, and at least announce people in two or even three languages. 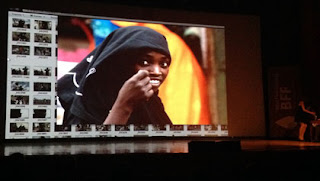 ho was next or why. A man sat at a desk and showed some rather beautiful and moving photos of (I guess) Africa and African’s engaged in some sort of conflict. He also had an interesting presentation style where he flicked through 10 or 12 images very quickly and stopped at one for some time before moving on quickly through another 10 or more. It left you with impressions until you came to the main photo.

I don’t know who he is, why he was there, which country or region he was presenting. And there was no one to ask.

Then the highlight – or what should have been. The presenter stood and read out words … well at least the slide behind told me what award category was being talked about. There were no awards given or people to receive them. The names of the winners did not come up on the screen. There was scattered,halting applause to punctuate between awards. It was entirely in Slovenian – although I might have heard the name John O’Brien (Johnu O’Brienu) a couple of times. So I didn’t know who won what. Finally the organisers took the stage and spoke in a rather subdued way about something, probably the festival.

And it was over.

Now at this stage in an event, there is a Press handout with useful information like who the winners are, the Facebook page is updated and the Tweets are already in the public domain. None of those things happened and 12 hours later website, Facebook and Twitter remain unchanged.

Later I asked the young women on the reception desk and asked them who had won what. Best they could do is:

Something went wrong with Bled Film Festival 2015. I don’t know what but