It is the jaw dropping brilliance of these young musicians that makes nights like last night so memorable.

Festival Bled continued Wednesday night as a lightning storm raged over Lake Bled. The Grand Hotel Toplice was once again the venue for performances by young musicians attending masterclasses at the Festival. This time it was the turn of young Korean violinists led by Prof Saewon Suh.

Saewon Suh, was born in and studied in Seoul, before continuing his studies in Cologne and Bern where he earned a soloist diploma. He holds a Professorship at the Kärntner Landeskonservatorium. He makes appearances as a soloist and chamber musician around the world and has held masterclasses in Austria and South Korea. This week his masterclass is in Bled. 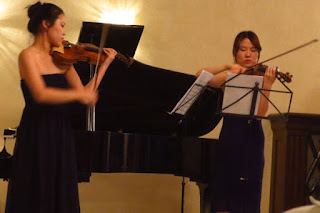 One of the more important aspects of events like these is the happenstance of of the audience mix. Yes, there are musicians and lovers of serious music from Bled and beyond, but there are also the people who just happen to be in town on holiday or staying at the hotel. It is an energising mix – and international audience –  for the young virtuosos whose dedication to their art is received with tremendous enthusiasm. For some of us in the audience, it is an opportunity to hear some music for the first time. 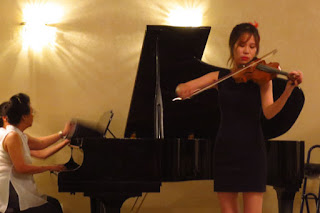 Last night in particular you could see the emotion of the event in the performers’ faces. Apprehension as they come through the door to stand by the piano, extreme concentration as they play, then – for almost all the musicians – that moment between the climax of the piece in that moment of silent appreciation before the applause. Then their faces beam. 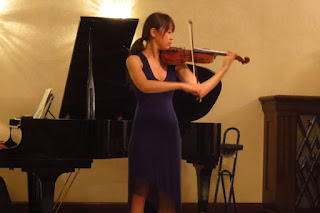 A La Cho and Cho Eun Kim began with Prokovfiev’s Sonata for two violins – remarkable interchange between the two.  The third and fourth movement of Stravinsky’s Concerto in D for violin and orchestra followed and was played superbly by Sanayea Song who was to finish the concert with an electrifying Carman Fantasy by Sarasante – even the thunder and lightning outside joined in. 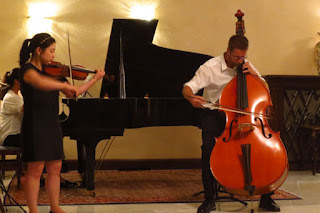 The range of the music was added to beautifully by Jiyoo Park’s interpretation of Gershwin’s It Ain’t Necessarily So. Before the final piece, Jiwon Jung violin,  Albert Wasserman Kontrabass (double bass) with pianist A Jin Cho played a really interesting piece by Giovanni Bottesini, Gran Duo Concertante.

Professor Bokjoo Suh-Cho accompanied all the other performances on piano.

Once again this is a moment to see into the future of music with enormously talented and dedicated young musicians.