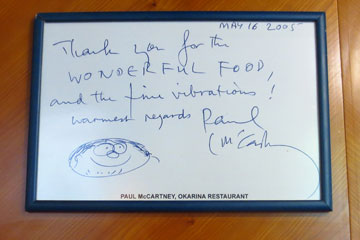 “I considered myself, even today, but back then when I was younger, to be a rare bird.” Leo Ličof is founder and artistic director of the Okarina Festival which celebrates its 25th anniversary this summer. We met in his restaurant Okarina to look back at the festival’s history and forward because even after 25 years, Leo still has ambitions for the festival.

Planning to visit Bled?
There is loads of information about where to go, what to do, where to eat here on my Firsthand Guide to Bled 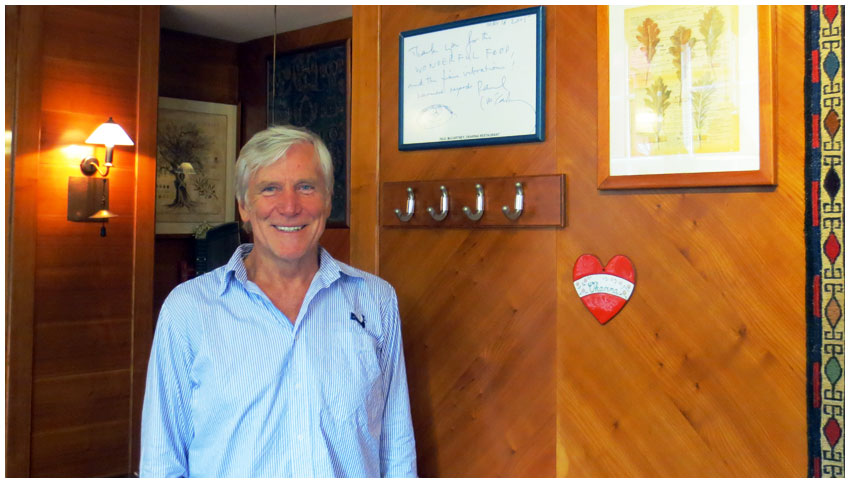 It began appropriately enough with music, a trip to India and a restaurant specialising in vegetarian food. “I came back from India after I followed the Beatles example and had gone to Rishikesh.” Rishikesh in the foothills of the Himalayas and the place where Maharishi Mahesh Yogi trained The Beatles and others in transcendental meditation. 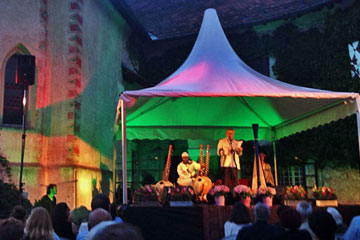 “I was inspired by so many bands playing good music.” He grew up, like so many people of his generation around Europe, listening to Radio Luxembourg and to the Dutch radio station Radio Veronlca. “I found myself really frustrated behind an Iron Curtain. All these bands were “non-moral” or even “prohibited”. I am mad about music – I love music . I played the violin – the fiddle. However it was impossible in Yugoslavia at that time to create anything.”

In 1991 everything changed. Slovenia withdrew from Yugoslavia, communist leaders throughout Central and Eastern Europe lost power and Leo seized the opportunity for his own revolution.

The toughest thing was getting the support.

“So, the first thing I did was to create the festival.” The first festival was held two months after independence in the grounds of the restaurant Leo owned on the shore of Lake Bled not far where the Okarina restaurant is now. There were only two or three bands on the bill. The next year was much the same and from there it began to grow.

“But after the first three or four years of being independent, old powers started getting back into power.” And those regaining power did not like someone trying to bring this music “to our beautiful country. Listen to our folk music!” In their opinion this was a “Strange guy bringing strange tunes. So they gave me no support; not moral, not financial. I kept on – there were many people around who were open minded.” 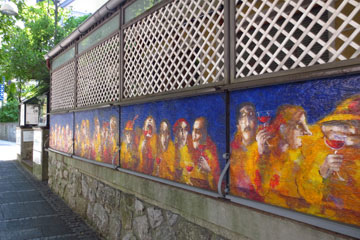 Moral support that gave me the strength to carry on

It was individual contributions from supporters that kept the festival going. His butcher gave him a small contribution, his baker the same and with these small amounts he could book another band, and then with some more money, book another. He was hanging on to the festival by his fingernails. “Then another mayor came along, who did not want the festival at all. ‘You have the right to do it – but don’t come to me.’ He was told.

“Then a different mayor came who was a bit more open minded and he gave 2 or 3 thousand pounds. But it was the moral support that gave me the strength to carry on.”

Over it’s 25 years, Okarina has been infused with local and national politics. But the whims of here today, gone tomorrow politicians have not dampened Leo’s spirit or self belief.

As he is talking I notice in the background Joan Baez is singing Dylan’s Forever Young.

“I felt myself being a musical messiah. It was my duty to shake up a bit of conscienceless of these people [in this region] to wake them up a bit. Then after 10 years I thought this is going no where … ‘Enough,’ I thought.”

After 10 years there was no support financial or moral. So there was no festival planned. “The mayor came to ask whether I would do the festival – I said no. But three weeks before the festival would have been due to start he came again pleading with me. ‘I’ll pay you – people are asking around.’ Because after 10 years people were beginning to think this is interesting.”

However over the last eight years Zavod Za Kulturo Bled (the institute for Culture in Bled) has been financially supporting the Okarina festival and Leo especially mentions Špela Repnik, secretary of Zavod za kulturo, who helps to organize promotion, press conference and takes care of local transfers.

This year there is a very strong line-up of women; Ester Rada, Cara Dillon, Neca Falk, Josipa Lisac, Gisela João, Carmen Paris along with women leading other bands. Was this planned?

“It’s coincidence. I saw them all performing in big festivals like WOMEX or Marseille. I was also at Iberoamericano festival in Bilbao. The women were the best. They are the strongest at the moment. And I want to pick the best. The festival is blooming now.”

Paul McCartney visited in May 2005

The First Okarina Restaurant
His proudest moment is still the first year in the garden of the original restaurant. Hardly surprising. It was a wreck of a building which had been used as a restaurant. He and friends spent months clearing it out, cleaning it up, planting a garden where the first festival was held. And began to play music – mainly British and American music – and added lots of vegetarian food to the menu. Leo ploughed all his profits right back into the restaurant. Standards improved –the restaurant became more popular. The diplomatic corps from Ljubljana were visitors as Ambassadors with representation in the city became frequent customers. He planted a garden. “It was a natural amphitheatre. I put a fountain in the middle – parachutes above the garden (for shelter and decoration), candles, and huge iron charcoal heaters.” And that was where they held the first Okarina festivals.

The better it got, the more he put into it – and consequently they higher the rent became. Eventually it was ridiculous demands for rent that drove Leo from the original restaurant to the Okarina restraint we were sitting in.

25 years on Leo still has ambition, there are bands and performers he wants to bring to Okarina. Straight off, he names The Chieftains who he has been developing connections with this year, and Sinead O’Connor. And he has been able to attract big names before. He would like to bring back Fairport Convention. But he wants to widen the scope of music at the festival. He wants more Jazz and more energy from other sorts of music.

Leo does everything himself – he’s promising himself a secretary to help next year. “Eighteen groups.” He says.”And I’m arranging everything from flights to t-shirts. Each band needs 30 or 40 emails forward and back.” He deals with all the contractual demands. “The band that has this requirement for staging, the band that has that need s conga drums to be supplied, this guy needs a flamenco guitar the other something else Leo has been arranging all these years. This is now getting over my head.”

We finish our Masala Chai (recommended!) and I get ready to leave. Then in a sentence Leo encapsulated the idea of Okarina in one short sentence.

“To create an atmosphere where people can start communicating – this is what we need most in the world, and in these mountains, even more.”