Share
Originally in Festival Bled Diary
Read more at www.LakeBledNews.com
Read more at LakeBledNews.com
It was pretty close to standing room only in the Grand Hotel Toplice, Bled last night, as the room filled with people waiting in anticipation for what was going to be an extraordinary concert.
Toplice is a big hotel. It has a lot of chairs, which is fortunate as the sofas filled and people milled around looking for a place to sit. More, elegant chairs arrived – this is not a place you are likely to find a fold up plastic number.  Even the Festival founder and director – one
of Slovenia’s leading violinists – was to be seen acting as furniture roadie, shifting chairs into the performance area.
If it were not a free concert it would have been a sellout. For this was an event of significance. The concert was intended to get back to the roots of Festival Bled. It was to celebrate the beginning 20 years ago. The young international virtuosos – all young women – had been attending master classes of Professor Michael Frischenschlager
The 11, accompanied by Ilya Maximov, played individually a programme largely written by Fritz Kreisler  (1875 – 1962). An early highlight was Clara Mesplé playing “Rezitativ und scherzo caprice”. That was followed by an outstanding performance of the 4 movements of Giuseppe Tartini (from Piran –1692 – 1764) 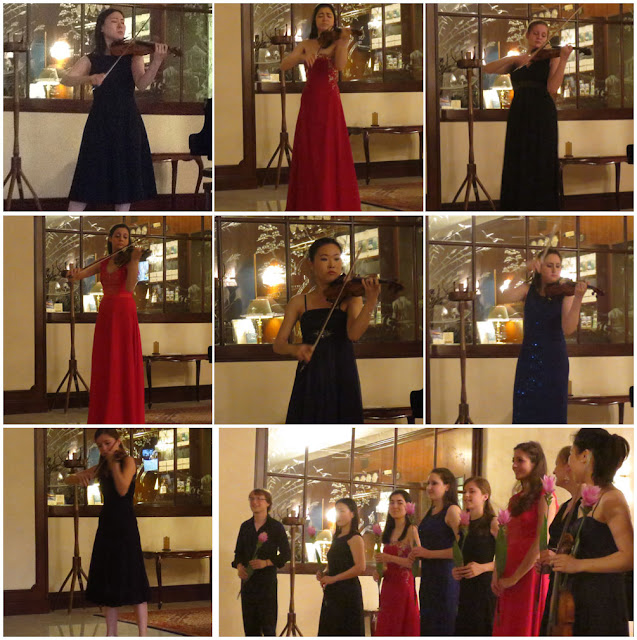 It was a standard of musicianship that would leave you in awe of these talented young women.
The setting – while in a large room – was fairly intimate. Perhaps it was like this to be in a Viennese drawing room 120 years ago. It was also a privilege to look both back at the foundation of Festival Bled and peek into the future of these young musicians.
This was one of the many free concerts as part of Festival Bled. If you are in town, do try to see some.
Follow the link for dates