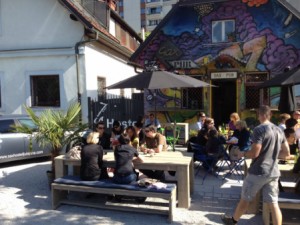 It was a warm if breezy September morning in old town Ljubljana. And I am sipping a coffee outside the famous Saks Pub  renowned for its multi-coloured graffiti style decoration. Ljubljana is the capital city of Slovenia and home of one of the most controversial bands to come from this region, Laibach. I was waiting to speak to Ivan Novak who with several others formed the band in 1980 when Slovenia was part of the Socialist Federal Republic of Yugoslavia. And where within a few years they achieved a sort of dissident status.

A few months before they were the centre of controversy again when they played two concerts in Pyongyang in North Korea.

And there is a Belfast connection, too.

Some videos you should see:
Laibach Spectre Tour live in Ljubljana 16th May 2014 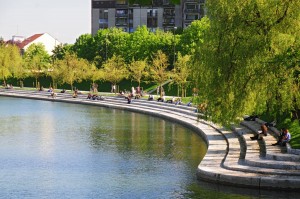 Ivan and I stroll down to the bank of the Ljubljanica where the slight breeze sounds more like a gale.  With the light breeze taking a toll on the microphone, we withdrew to the shelter of another cafe. Over cups of mint tea we talked about the North Korean visit. The band had played a selection of songs from The Sound of Music there – not quite their usual repertoire – about a month before Ivan and I met. The story was covered globally and even being mentioned on Jon Oliver’s US TV show Last Week Tonight.

Each year in the lakeside town of Bled in Slovenia, the most powerful people in the Balkans meet at the Bled Strategic Forum; prime ministers, foreign ministers, presidents meet with people from business, civic society, the media. Obviously last summer the mounting refugee crisis in everyone’s minds. But one of the scheduled discussions was the importance of music in international relations. And Ivan was one of the speakers. 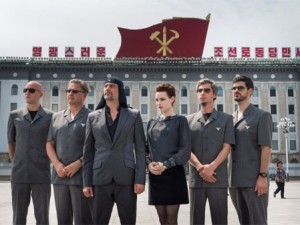 It is almost impossible to find a word to describe Laibach’s political interventions and commentary. Parody is not the right one – but it is one. It’s much more complex – much more ambiguous. Some people dismiss them as being far right – which is wrong. Others say their political leanings are far left – and that’s probably wrong, too.

“The big question about Laibach is are they taking themselves seriously or is it meant in an ironic way?” But he thinks that that they are the wrong alternatives. He says, “Ironic is seen as being subversive, to take it seriously is to be a conformist. To be really subversive is to take the system more seriously than the system itself … and this is perhaps one of the keys to Laibach’s strategy.”

I don’t think they want to be conventionally pigeon holed and are more energised by starting the discussion than providing an answer.

In 1983 they were banned by the state in Yugoslavia. In response they formed Neue Slowenische Kunst – NSK

NSK state still exists. There is a website acting as a “virtual embassy”. In the past NSK has issued passports – very official looking, heavy card and paper – one of my friends holds one – but won;t get you past a real passport control.  And I expect now very collectable.

Even though the band has been on the world stage for decades they are not welcome in some places. Even though they have played Russia many times in the past, Laibach are now banned.

35 years on from their first days as a band from the industrial coal mining area of Slovenia, there are 6 touring and performing members. Ivan and Milan Fras are the original members. The other three were all small children when Laibach was formed.