This is Generation Innovation Night of Ambition. The annual event has become important not just for schools who nominate pupils as participants, it is a key moment in the year for organisers Connect at the Northern Ireland Science Park and for many, many people involved on the fringes of NISP. 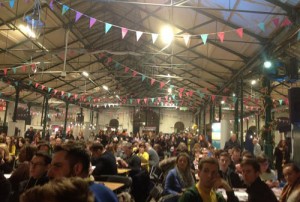 Each year dozens of the most successful business and tech founders in Northern Ireland sit with the school kids for creative sessions generating ideas. And many of the young people who co-organise the event come back year after year as volunteers.

St George’s market is massive – once the place is rearranged with seating and a big stage and filled with hundreds of people, there’s still lots of room to add stands. Some of the stands were staffed by young people who are already getting a taste of real business with Young Enterprise. 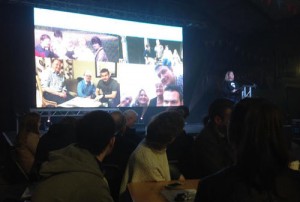 Among the 30 or 40 founders there, were some who had sold companies for millions, some long established in the tech industries in Northern Ireland and some who had just started up. Some were at tables working directly with the delegates, some were on the stage, including a few who were not much older than the students themselves. Rach Gawley @deadlytoes  from appattic.co.uk (pictured on stage).

And a little older – but frankly not much – the night’s keynote speaker, @markdowds who has just returned to Northern Ireland from the States where he has – for years – been an innovator and entrepreneur.