Astor Piazzolla: The man who revolutionised the Tango 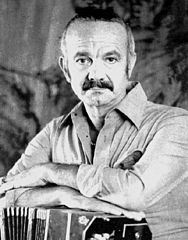 I came by Astor Pantaleón Piazzolla by chance. Last year I was given a private recording of the SFK Youth Orchestra performing at the Bled Festival in 2007. The opening was Astor Piazzolla’s Oblivion. I had never heard of him, never heard the piece and, well you know that tingle you get when you find something new?

As I have said before, I’m just trying to catch up exploring music different to the music I have been listening to before. And I have a lot of catching up to do.

Astor Pantaleón Piazzolla (March 11, 1921 – July 4, 1992) was an Argentine tango composer, bandoneon player and arranger. His oeuvre revolutionized the traditional tango into a new style termed nuevo tango, incorporating elements from jazz and classical music. A virtuoso bandoneonist, he regularly performed his own compositions with a variety of ensembles.

Here is a taster of Oblivion and below a link to all his work on Spotify.