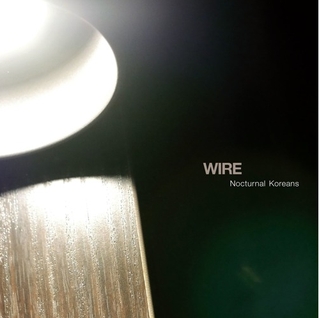 And I was playing their early work in the early 1980s. Nocturnal Koreans is a mini album of 8 tracks which I’ve been listening to for a couple of weeks – since its release.

Excellent, memorable. This about Wire from Wikipedia

Wire are an English rock band, formed in London in October 1976 by Colin Newman (vocals, guitar), Graham Lewis (bass, vocals), Bruce Gilbert (guitar), and Robert Gotobed (drums). They were originally associated with the punk rock scene, appearing on The Roxy London WC2 album – a key early document of the scene – and were later central to the development of post-punk.

Inspired by the burgeoning UK punk scene, Wire are often cited as one of the more important rock groups of the 1970s and 1980s. Critic Stewart Mason wrote, “Over their brilliant first three albums, Wire expanded the sonic boundaries of not just punk, but rock music in general.”

Wire are a definitive art punk and post-punk ensemble, mostly due to their richly detailed and atmospheric sound and often obscure lyrical themes. The group exhibited a steady development from an early raucous punk style (1977’s Pink Flag) to a more complex, structured sound involving increased use of guitar effects and synthesizers (1978’s Chairs Missing and 1979’s 154). The band gained a reputation for experimenting with song arrangements throughout its career.