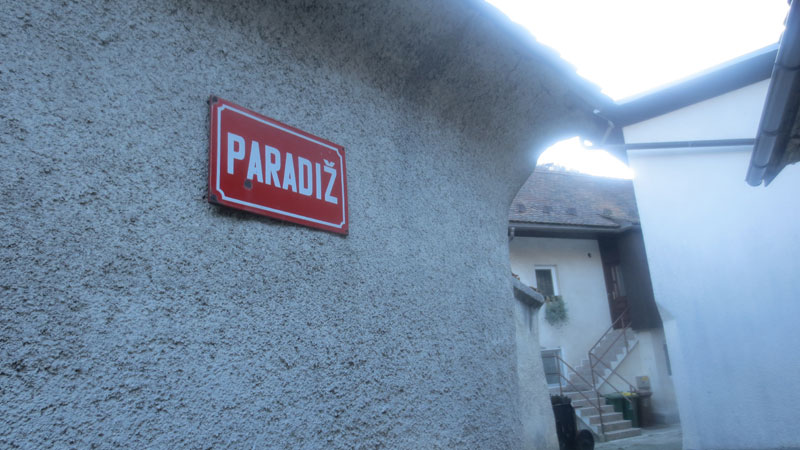 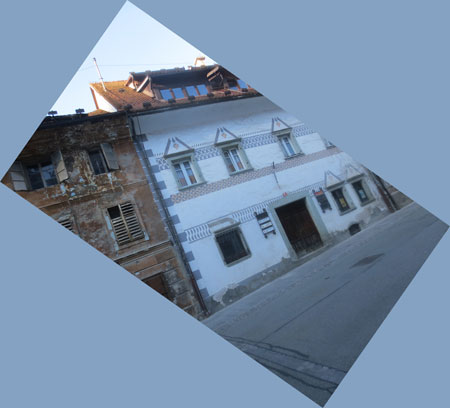 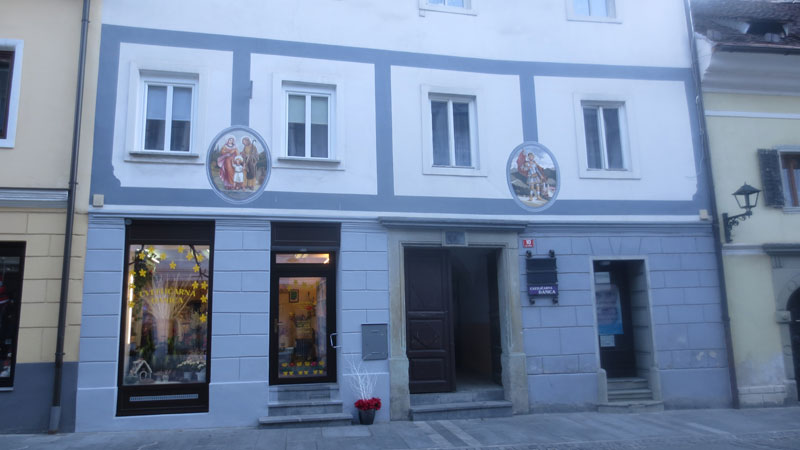 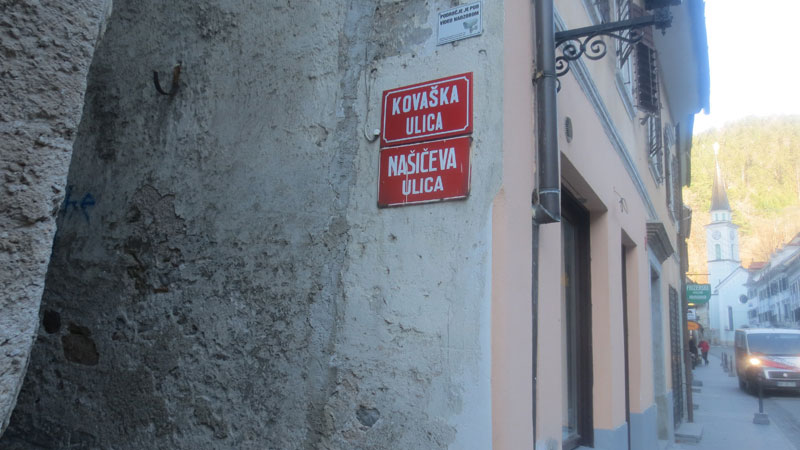 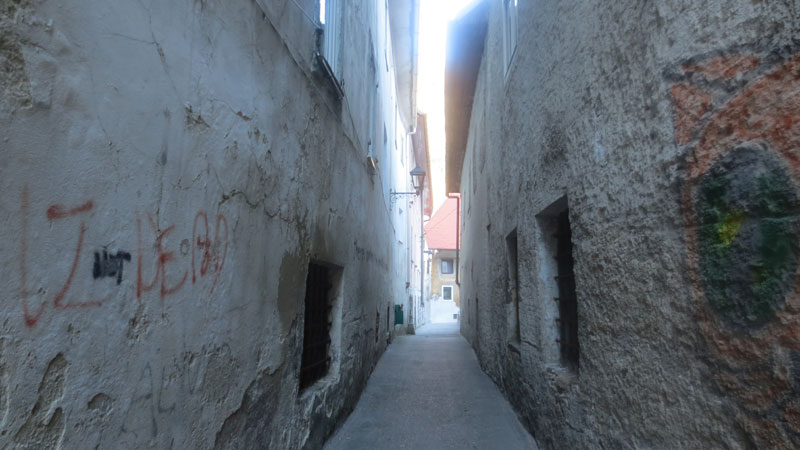 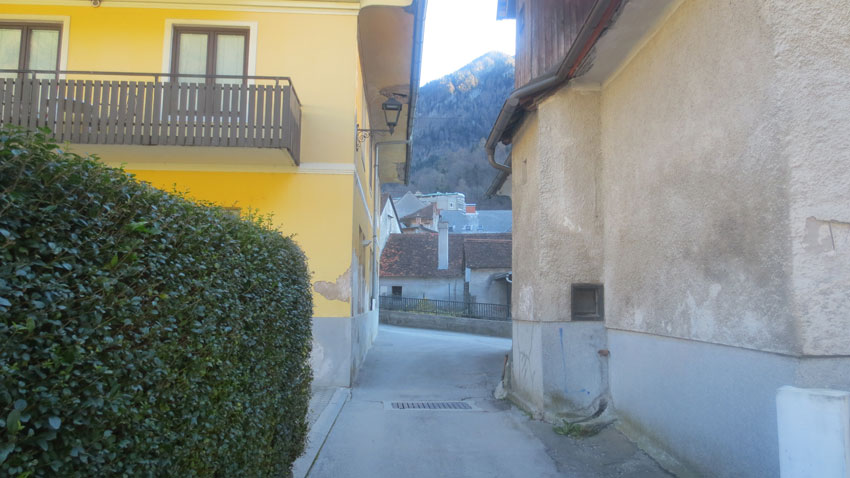 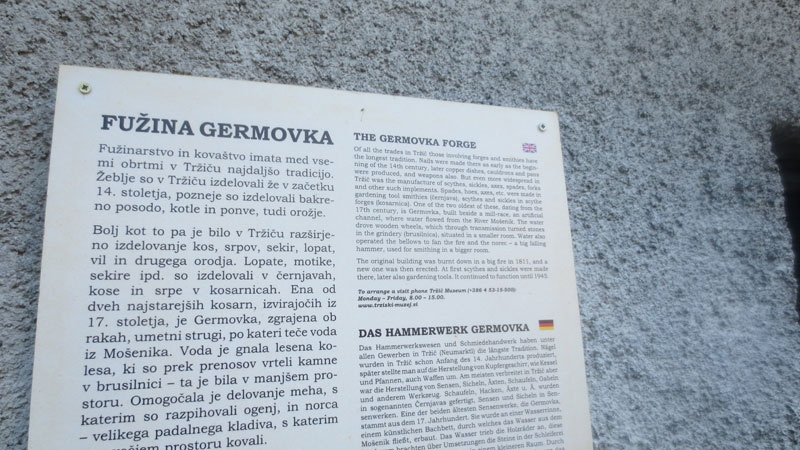 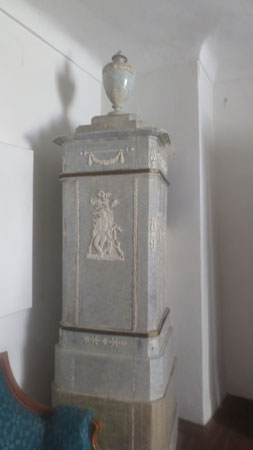 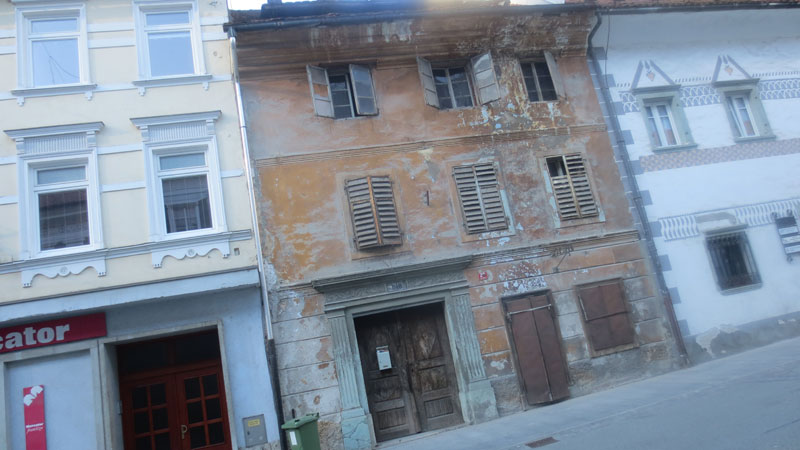 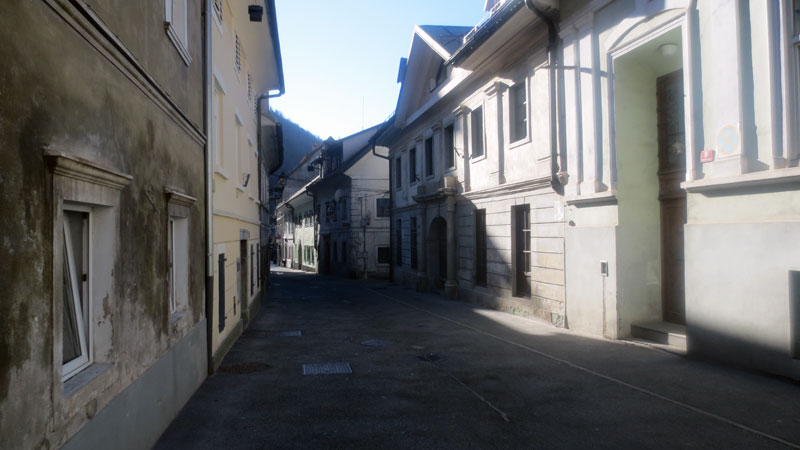 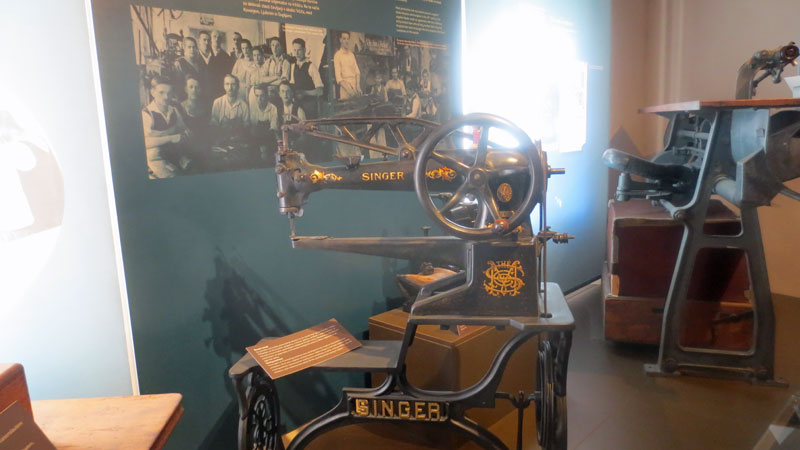 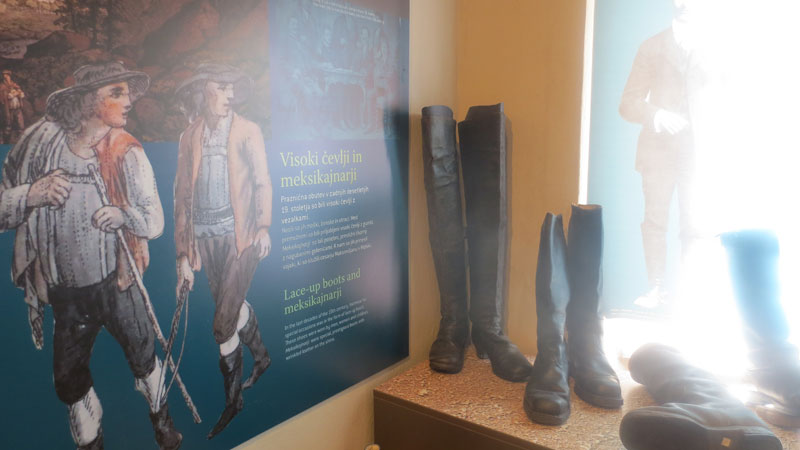 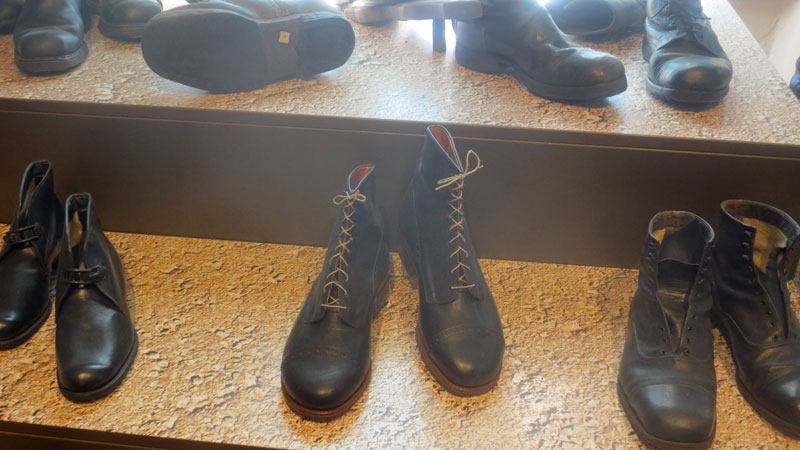 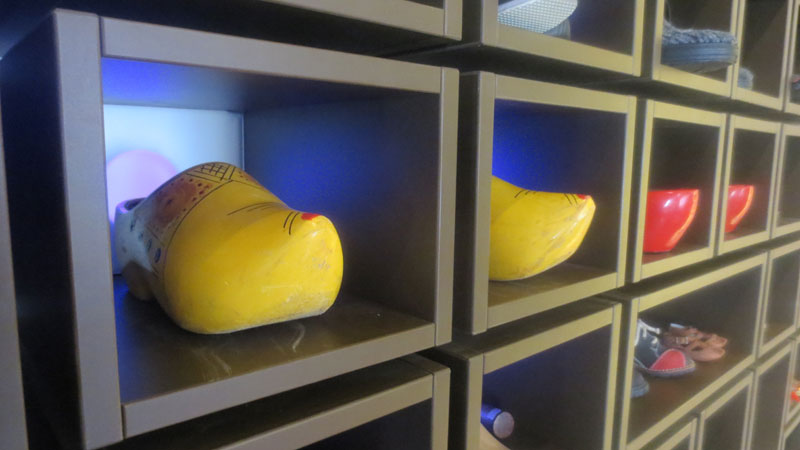 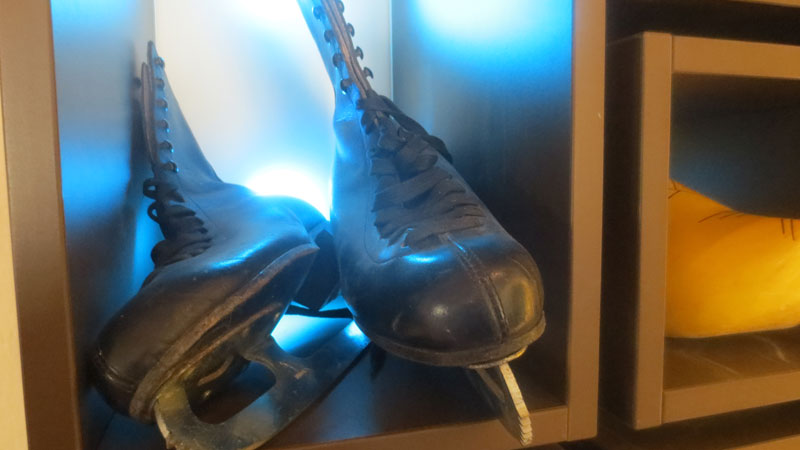 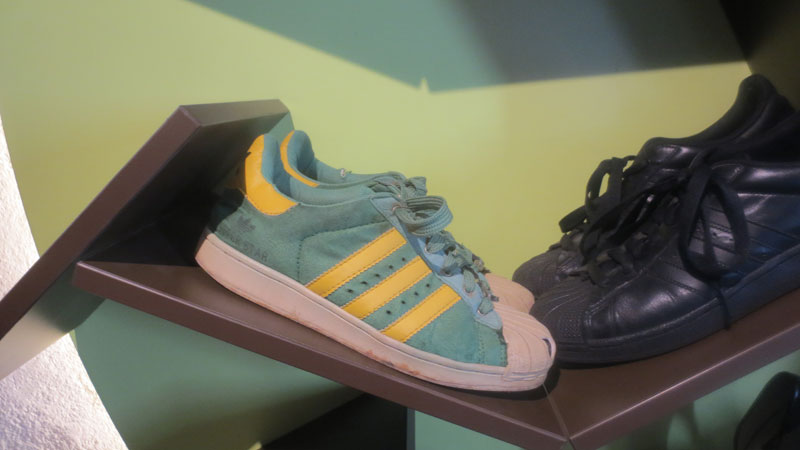 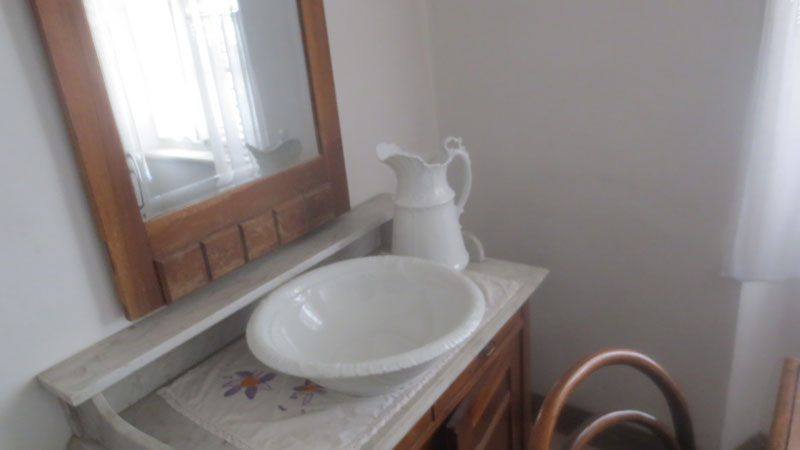 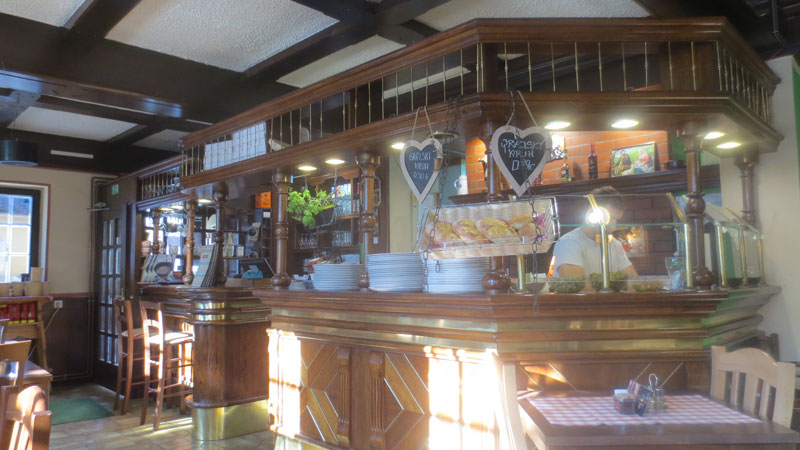 Today, I spent about two and a half hours wandering around the old Slovenian town Tržič, which is a short drive on the highway from Bled, but a much longer – and significantly more interesting journey by bus. There are two bus routes. One, (11:15 am weekdays – there are probably others) pushes high on narrow roads from Radovljica, through Begunje then  Stana and Hudi Graben with magnificent views south over plains and the mountains off in the distance. The other route via Naklo, is more quotidien.

I have wanted to visit the town for a while. It probably looks better in the summer. I got the impression from tourist literature that the old town is more vibrant then, too. Hardly a soul about; a little traffic – mainly tractors. And like so many places in Slovenia, strangers you pass on the street say hello – “Dober dan” – as you pass. Although me mumbling into my recorder might have attracted a little more attention than a usual visitor.

Today was sunny (although some of the images are a little grey) and cold. The first impression is the smell of wood fires and the sound of water.

Wikipedia says of the town’s history:

The settlement in the Duchy of Carniola was granted market rights to hold weekly fairs by the Habsburg emperor Frederick III in 1492, which further promoted the development of the town. The great fire of 1811, which destroyed the buildings on the left bank of the Tržiška Bistrica River, changed the town. Much of the architecture was reconstructed in a Classicist style. After the buildings were rebuilt they needed to have firewalls, iron doors, and window covers, a very rare feature in Europe. The town center of Tržič has been protected as a cultural heritage site since 1985.

That fire, then, explains why most of the buildings marked with a date show that they were build around 1850.