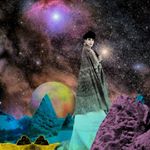 According to The Guardian:

These are difficult times for the Turkish music scene, with threats of festival closures and stories of foreign performers cancelling visits in the aftermath of the terrorist attacks and clamp-down that followed the attempted coup. So it’s good to find that local artists are still creating inventive new work, with Gaye Su Akyol clearly a contender for international success on her first international release. Her influences, she says, include the veteran, highly political Turkish folk singer Selda Bağcan along with Nick Cave and Grace Slick, and the result is a set of compositions that are both dramatic and distinctly Turkish. The album starts with the swirling, rapid-fire playing of the Istanbul Strings backing her cool, clear vocals on Hologram, a surreal love song with unexpected changes of pace. Then the guitar band takes over, helped by oud, kanun and trumpet, on songs constructed around atmospheric, brooding riffs. An original, intriguing album.