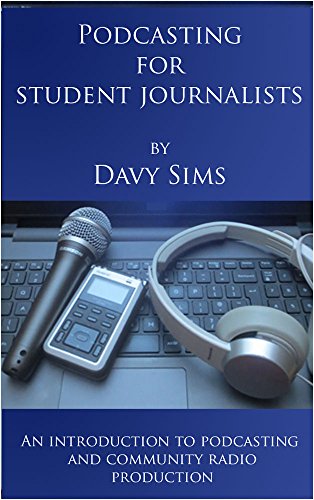 Recording away from the studio

The first question is “Why out of the studio?” Some of the reasons are practical;

But some other reasons are less practical and more to do with adding additional audio dimensions to the podcast. There is nothing wrong with all interviews happening in the studio, but if you can vary the atmosphere using location interviews, it adds variety to the overall sound of the podcast.

[Hi – I’m Davy Sims. I have been teaching, lecturing, speaking and writing about radio and podcast production for years and have been producing radio since 1979. In 2016 I wrote Podcasting for Communities intended for community organisations intending to make podcasts for their clients, supporters, funders and other people they want to reach. Podcasting for Journalism Students is intended as a level 1 introduction to students who are studying journalism where radio and podcasting form part of their course.]

There are all sorts of reasons why you would record outside. A podcast episode can benefit from changes in tone and atmosphere. Reporting from a place rather than just about a place can give context to the story. It can add new textures and make the episode more interesting.

Willis McBriar lectures at Belfast Metropolitan College in Creative Media. He teaches students studying computer games about sound and how it can be used to enhance video and games. He also coaches small businesses in audio visual techniques. Willis spent over thirty years in the BBC as a broadcast engineer and a communications engineer. “I’ve had the dubious pleasure of teaching journalists about techie stuff … which has been a challenge. He says with a smile. “Don’t give me the pointy headed crap.” one journalist told him. “Just make it work.”

You can hear an extended interview with Willis on the “Podcasting For …” blog [http://www.podcastingfor.com/sound-recording-and-microphones-interview-with-willis-mcbrier/]

I wanted to talk to Willis about microphones, sound and recording techniques.

He gave me an example of students who had recorded a report for a mock radio programme. It was awful and the students knew it. Willis explained. “The recording had been made at the side of a road, and there was a lot of traffic noise. The students asked about which microphone should have been used to have recorded this better.

“The two things I said were, first; it looked as if they were using an omnidirectional microphone which was picking up sound from all around.” “Omni” meaning all things. “They would have been better off using what is best known as a hypercardioid or zoom microphone which as best it can, picks up from one direction.

The choice of microphone is critical to making a good recording. Willis and I will discuss some specific models toward the end of this chapter. There is also a podcast with the two of us talking about sound, recording and microphones.

So have a good pair of headphones, the more external sound the block out the better. Put them on when you are recording so you can hear what the microphone is picking up. These are just some sounds your ears fail to hear, but your microphone will:

“If you have made a recording with a lot of “noise” because the level was too low, you can do something with it.” Using editing software – even basic software like Audacity – you can filter out the top end. “You’d have to be pretty bad to get the level so low, it’s impossible to make out what you are saying. Once you have over modulated, once you have distorted the sound, there’s nothing you can do. It’s gone.” You can hear examples of both in the podcast with Willis.

The second question is “What equipment should I have?”

Most of us carry around enough equipment in our pockets or bags to go live on radio or TV anytime from almost any location. What once required trucks and cameras and specialist operators and expensive communications connections are on our smartphone.

All you need is a 3G, 4G or connection to the studio, the right sort of app. and someone to call on the other end to take your feed.

At a pinch, our smartphone has a sound recorder which is good enough in to use in an emergency to. I’ll explain why it is not recommended in a moment. It has a lens that can be used for video and even going on air if needed. While a smartphone is great to have and fine as a fall back, you will need better for recording for your podcast.

Why is it not good enough?

One issue is the transfer of files to your computer from editing. The phone and the file extensions might not be compatible with your editing equipment. There are ways of getting round that.

More importantly, you cannot properly monitor the recording through headphones.

There are some sounds that you will not hear unless monitoring with your headphones on. Here are a couple of examples and what to do about them:

These, and other problems, may not be picked up during the recording.

However that monitoring problem can be overcome easily as Willis McBriar explained.

“If you plug in a pair of headphones they switch off the internal microphone. You can overcome this with an adaptor. They are very cheap to buy.” There is a photograph of a couple of adaptors on the website.

“They will allow you to plug in a set of headphones and a microphone into the headphone socket of a mobile phone.” By doing this you use the phone as a recording device only.

“One of the great problems of using a mobile phone as a recorder is that the standard apps that come with mobile phones usually only allow you to record in mono. You can get apps that provide metering, so at least you can see what levels you are recording. But you have a fundamental problem of monitoring what you are recording.”

If you do have to use a mobile phone, Willis pointed out something that is counter intuitive. “The most fundamental mistake that people make is that they forget that the microphones are at the bottom of the phone, at the other end from the headphone socket. So you need to turn it around. The screen (and the monitoring app.) will be upside down.”

A mobile phone is not recommended unless you can monitor the recording. In real life though, sometimes you are left with no choice. Radio producer, Johnny Seifert suggested this strategy. Spend a few moments recording a conversation. How did they get there today? How was the weather/traffic/scenery – it really doesn’t matter – on the journey? This will enable you to do three things. First you will settle your interviewee and begin getting some sort of rapport between the two of you. As you are recording you can set the right level. Then listen back to the recording and check for faulty connections, electronic interference and the balance between you and your interviewees.

Now you are ready to go. Remember to push the “record” button again …

Monitoring – what should you use?

While you can’t plan for every eventuality, you can be prepared by always having a backup option available. Keep simple earbuds in your bag or pocket. If your headphones fail or you forget them, at least you have a means of monitoring. Buds are unobtrusive when you are interviewing and good enough to monitor the basics.

I had never heard of psychoacoustics until Willis told me he taught the subject. “Any time you are doing a recording you should be wearing a decent pair of headphones that can shut out as much of the external noise as possible. If there is a buzz coming off some electrical equipment, you’ll notice that the minute you come in and after a few minutes your brain will say to itself .. yeah, that’s ok … that’s always there .. And it will filter the sound out and you will not hear it. What you hear is filtered by your brain and ear. So you will be more attuned to the human voice than almost anything else.

There is more from Willis in the podcast [http://wp.me/p7UXLW-1h]