The books so far 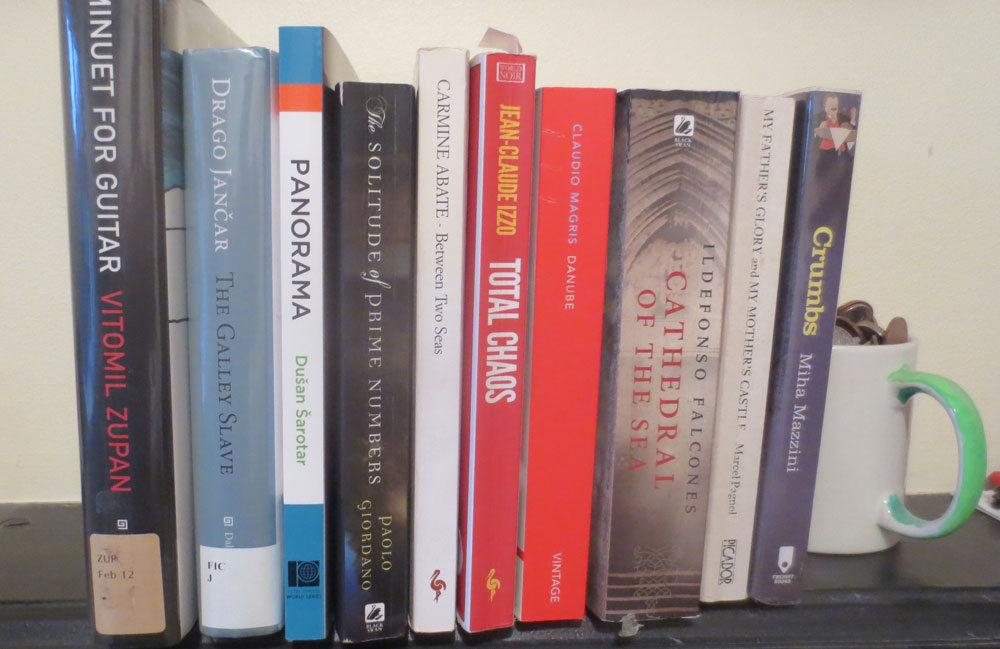 I started with great enthusiasm and energy finding and reading books to accompany me on the make-believe meander around the Med. When I reached Slovenia, I began to slow down for a brace of reasons. I hit a couple of difficult books that were not the page turners I prefer, and I had less time available.

We are winding up the first phase of the journey and the “to read” pile is building. They’re books, they are going nowhere. I can return to them anytime. And they suggest others.
I’ve named most of the books already. Some countries have more than others, I have read more than listed – these are the ones I have enjoyed, or I simply want to note.

Spain:
Cathedral of the Sea – Ildefonso Falcones. Something of an emotional roller coaster. I got about half way through just as the lead character was about to make a decision. It was going to be the wrong decision and I had to put the book to one side. “As long as I don’t read it, it won’t happen!” A very affecting story set in Barcelona and quite a long read.

France:
Marcel Pagnol wrote the beautiful Jean de Florette and Manon des Sources. I read both decades ago – and I will return to them. This time I read My Father’s Glory and My Mother’s Castle.
Set in a very different south of France in a very different era is the detective noir Total Chaos, the first in the Marseilles Trilogy by Jean-Claud Izzo. Brilliantly atmospheric. I will return to the other two in the series sometime.

Set in the near future “Submission” is a novel by Michel Houellebecq. I don’t know whether I was supposed to find it funny, but I laughed a lot, several times particularly when I gave my French narrator a posh English accent.

I got a bit stuck (lost?) in France. There are many other books I wanted to read among them classics like Bonjour Tristesse by Françoise Sagan and Tender Is the Night by F. Scott Fitzgerald.

Monaco:
The principality was next Georgio Faletti’s I kill didn’t live up to its title. Books set in radio stations that are not accurate drive me nuts. I know how doctors feel about medical dramas.

Italy:
The same for the Italian book Voices by Dacia Maraini which I did not enjoy at all. Tales in the present tense are not to my taste and that is not how radio works. It was a promising story, too. I was disappointed to leave it aside unfinished.
But there were two books that really did lift my spirits God’s Mountain by Erri de Luca – the story of a poor 13 year old set in 1950’s Naples slum Montedidio. It is short, mildly fantastical and beautifully told.

I have two favourite new discoveries. The first is The Solitude of Prime Numbers by Paolo Giordano. Again, the story of children with unique stories as they grow up dealing with their family and mental problems and how for each the consequences of a decision made early in lives haunted them and formed their adulthood. Don’t looks for happy endings.

I didn’t think that could be topped, until I read Between Two Seas by Carmine Abate. Easily my favourite so far. I have discovered southern Italy. It has been an unexpected surprise – the music was revelatory, urgent, exciting and inspiring. The book is those things, too. But a very different pace and atmosphere.

Slovenia:
There is a pile of books for Slovenia. I will be putting them aside for another time except Crumbs by Miha Mazzini. I don’t think any of the characters are in any way attractive, the main character is a nasty piece of work, a scrounger and misogynist. Not someone you want to meet in a bar. He will drink your pockets dry and try to seduce your wife. I also suspect he is a bit smelly. He lives and works in an unnamed town (which I suspect is Jesinice). This is a tremendous story set in modern Tito time – mid seventies perhaps?

I tried so had to like Minuet for Guitar a story set among Yugoslav Partisan Anti-Fascists. I have set it aside to finish later – it’s just getting a bit – you know – boring. Drago Jančar’s Galley Slave is on the pile as is the contemporary Panorama, Dušan Šarotar which starts in Galway curiously enough.
On to more discoveries and looking for interesting suggestions from Croatia going to Morocco – I am looking forward to reading more of Elif Şafak. The Bastard of Istanbul is a tremendous book.