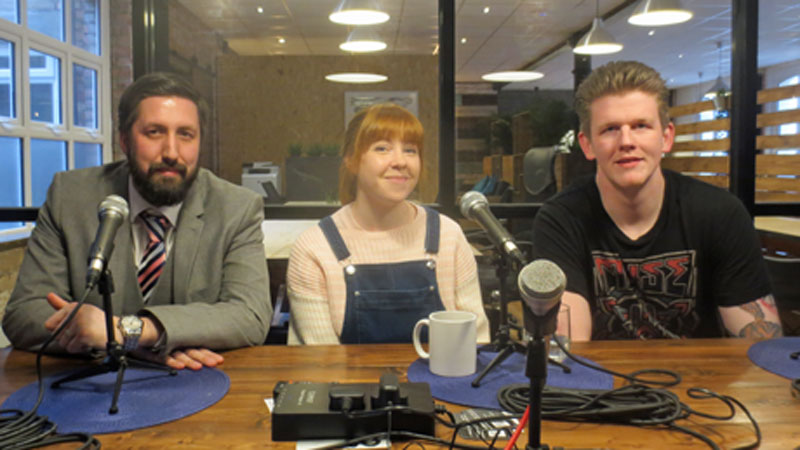 Music and the business of music is the theme of this first episode of the podcast.

Ross Moffett runs a project called Pop Up supporting young musicians in Northern Ireland, among them Sonja Sleator and Stuart Lunn. I met them at a new co-working space in Belfast Loft Space. There are links to Stuart and Sonja’s music and profiles below.

In the next episodes we will be talking about radio, Immersive media, funding a start-up, women in technology, and fingers crossed for a report from South by South West from a group from Belfast who are attending this year

BACK TO INTERVIEW INDEX

Pop up. The brainchild of Ross Moffett and James Brown is a platform that is revolutionising the Irish music scene. What has started as a simple music promotion in response to the lack of an open music scene in the country has quickly grown into professional services and support network for some of Ireland’s brightest musical talents.

Regular showcase gigs give the public access to some amazing talent all under one roof, whilst the artists working with pop up benefit from regular support, promotion and networking, along with seminars hosted by pop up bringing in industry experts to nurture and develop their talent and careers.

In 2018 it is full steam ahead with tours being booked in the UK, Ireland, and the United States. Pop up continues to grow its roster to allow the finest talent to come on board and benefit from the support network and professional training, as well as playing at some of the best music venues to our ever-growing audience. (From the Pop Up website)

Sonja Sleator has established herself as one of Northern Ireland’s most recognisable singer/songwriters.
With regular performances across Northern Ireland, including the Society Sessions, Sunflower Festival and Culture Night, as well as a support slot with local legend Kaz Hawkins at the EastSide Arts Festival. With appearances on local radio and TV, her story driven songs are making her one to watch in the Belfast music scene.

Not afraid to venture outside her comfort zone, Sonja has performed across the UK and Ireland, most notably in London’s On’t Sofa Sessions. Outside the UK, she has performed in Nashville, New Orleans and San Francisco, including an appearance on the famous Norm’s Rare Guitars YouTube channel.
She released her debut EP, ID, in 2014, followed up with charity single, Christmas Time In This Town.
In 2017 Sonja recorded her second EP, ADAMS, with acclaimed producer Michael Mormecha at Milbank Studios in Northern Ireland. (From Sonja’s website.)

Started in 2014, Chase the River just a bunch of tunes written by Stuart Lunn. Starting out as an acoustic duo, it is now evolved into the powerhouse of big hooks and big sound that has toured Europe and the US. Constantly developing and evolving the sound, partly on a mission of honing the Chase the River show, and partly, almost more importantly, on a journey of pissing off my die-hard fans, to see how far I can push the envelope before they think I have gone completely mad.

In truth, I am not exactly one for grand sweeping statements about who I am or why you should spend your money on me. Don’t get me wrong, I am a musician, every penny literally helps with things like food.

So what do you get?

A hard as hell working musician. I write I record, I tour. I take the piss solidly out of Donald Trump on Twitter (if you actually like him, please please PLEASE know that we will unlikely like each other). I promote peace and love and good times. I occasionally drink to excess. I smoke quite a bit.

Beyond that, I am always looking to make the best music I can. A lot of people who see me play think I am pretty damn good at it. So I keep doing it. In 2018 a brand new, slightly disturbed version of Chase the River is coming out. After my last USA tour, I made a lot of new music, it is very melodic, it is very synth driven. And it is f**king awesome. I wouldn’t lie about that, I am seriously proud of it. Anyway, you can buy tickets, read my latest musings. (From Chase the River website)