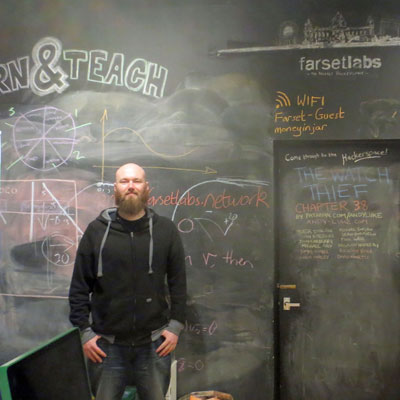 One of the many things I like about making podcasts is after years of producing formal radio programmes lots of the conventions can be abandoned. For decades I lived under the whip of the tyrannical Greenwich Time Signal. The most grievous sin of all was to crash the pips – so many interesting conversations were brought to a hasty conclusion well before time should have been called. A podcast episode can be as long or as short as it needs to be – this will be one of the longer ones.

We have two interviews. Victoria McCallum is one of the organisers of Women Techmakers Belfast. The main summit will be held in W5 on Saturday 14 April and there will be workshops the evening before.

The second part is a conversation with Andrew Bolster – known almost universally simply as Bolster. He was one of the founders of probably the first hacker space in Belfast – Farset Labs. It’s a tech lab, a creative hub, a workshop, a tech store, a networking place and partly a museum of a techie childhood. It also has the biggest blackboard in Ireland.

We all know that Belfast used to build the worlds biggest ships. But it also had the worlds biggest fizzy drinks factory – ginger ale from C&C was the thing back then, and exported Linen to the world. There’s a cluster of high tech globally known names now where the ships were launched, and one of the great linen mills now houses tech and media companies, has one of the fasted internet connections in the city and is the home to Farset Labs – the first hackerspace in Belfast.

They say that they are “an open community of students, professionals, academics, freelancers, artists, hackers, and organizers that believe strongly in experimental learning and the Do-It-Yourself ethic.”

UPDATE: Bolster has found the initial “launch” post from 2010 here on Google Groups

Bolster and Victoria are on Silicon Island’s list of top 10 tech influencers in Belfast.

As St. Terry of Wogan would have once said – “a letter has flooded in” – well and email, from Pete McVeigh with some interesting observations on innovation in radio. Thanks Pete, much appreciated. You can hear that episode on U105’s big move, also the interview with Deepa Man Kler and the discussion about young musicians by subscribing to the podcast.