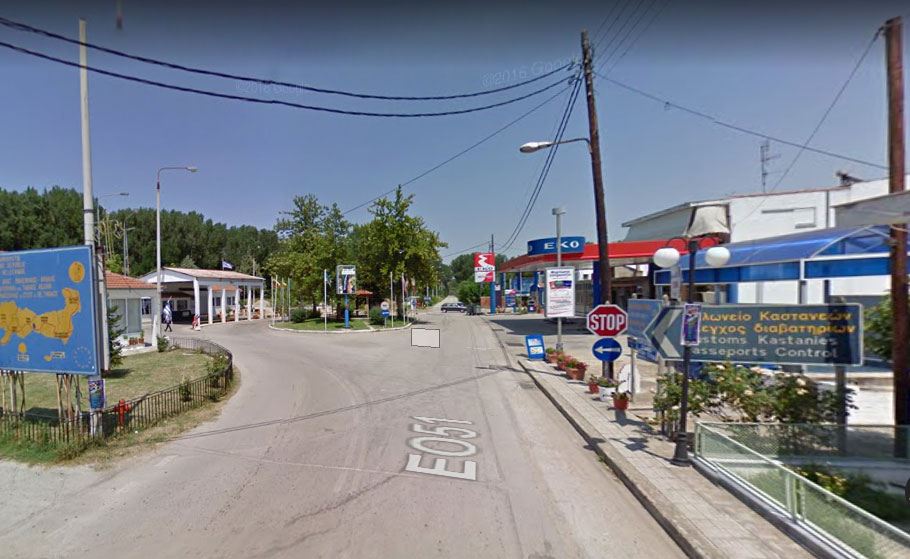 From Greece to Turkey.

Considering the size of the two countries, and the length of the border between them, it’s surprising to discover there are only these crossing points: İpsala, Karaağaç, Kastanies, Kipoi, Uzunköprü and Pythio railway station. The photo (screenshot from Google Maps) is at (or near) Kastanies. Others are more industrial and ugly.

My podcast on creativity and so on rather got in the way of this exploration of music from the Mediteranean. I was exploring both creativity and Turkey, but not getting time to write notes on my Anatolian finds. But here I am and I have several new favourite albums and at least one new favourite band. Light in Babylon.

An astonishing 9 million views of that song Hinech Yafa by Light in Babylon. There is next to nothing by them on Spotify but you can download a studio version of that song from Bandcamp.

Their two albums are available on their website, but not on Spotify. One to add to my favourite album list is Yeni Dunya.

Here’s what others are saying:

“A celebration of the cosmopolitan traditions of both Istanbul and the Sephardic Jewish community and another example of the great music that is coming out of the Eastern Mediterranean right now.”
fRoots Magazine

Istanbul based ethno folk ensemble Light In Babylon are one of the last years freshest musical exports of Turkey. The stunning voice of the singer Elia Kamal combined with the beautiful sound of the santur and the western guitar-playing result in a mind-blowing experience.

Light of Babylon kick off the playlist, but until I found them the lead was occupied by Gevende and their album Kirinardi. The band are from Eskisehir in the Asian part of Turkey They have been around since 2002 playing music that tends to favour electronic and folk rather than electric folk (if you know what I mean). There is some ethno influence, but it’s a bit jazzier, even “psychedelic”, orchestral. Kirinardi has a fair amount of rich orchestral themes, too. More a Pink Floyd/Laibach sort of experience than say … Fairport Convention or Horslips.  Here’s an interview with them.

I should mention here that Wikipedia has been a great source of information about these musicians and throughout this journey. Ironically, I can read about Turkish musicians at home but Wikipedia (Vikipedi) is banned in Turkey.

A few times I have “arrived” in a country during this imaginary trip, and honestly thought that I would find no music for a playlist. Turkey is one of those countries. But surely a population of 80 million people, a place where east and west meet, a place that has a foot in Europe and the resat of its body in Asia (there is even a bridge that joins the two continents – probably more than one). The Bosphorus Bridge known officially as the 15 July Martyrs Bridge extends between Ortaköy (in Europe) and Beylerbeyi (in Asia).

I had been missing Balkan Brass Band music and technically we are still in the Balkans (the European part of Turkey is). So I was more than a little delighted to find Kolektif Istanbul. Great! Balkan brass! Wonderful energy and musicianship. Will Pastırma Yazı be another favourite album? Probably. Pastirma Yazi translates as “Bacon”, which is weird – but it’s the translation that makes it so

“Bacon is a term used for days when the temperature is generally high at the end of the autumn season (from the end of October to the middle of November), and the temperature is high in season. Some years happen a few times, sometimes never. It usually lasts a few days or a week. Daylight is sunny, light windy and misty, nights are cool; it can be seen frost in the evening with no precipitation.” Vikipedi

Istanbul is one of my favourite cities – certainly in the top 5. It is a wild ride of a place – exciting, pulse raising, beautiful, ugly, exasperating – so many people. And that’s just going out for dinner. It is also a vitally young city, intellectual, rich, poor and cats everywhere.

Most this list are from Istanbul many began somewhere else or have moved on to other countries. There are even some from Canada.

Muammer Ketencoğlu was born in Tire, Izmir in 1964 but now lives in Istanbul. His music sounds as if it is from someone at least a generation older. I thoroughly recommend the album Sandığımdan Rumeli Türküleri – stacks of energy and well, fun and we don’t have enough fun. Pretty sure this will be on a favourites list from this section of the journey

There is more fun and general weirdness from Istanbulites BaBa ZuLa who create a rather wonderful but eccentric music. Eccentric did I say? Oh, and psychedelic, too. How eccentric? Here’s the line-up: Levent Akman (spoons, percussions, machines, toys), Murat Ertel (electric saz and other stringed instruments, vocals, oscillators, theremin), as well as darbuka and percussion player Ümit Adakale, Periklis Tsoukalas on electric oud and vocal.

Yes, electric oud, spoons, and theremin. They’ve been around since about 1996. Check out the album Do Not Obey.

On their album XX they collaborate with other musicians including Brenna MacCrimmon – not Scottish, but Canadian.  MacCrimmon’s music is authentically of this region, but very accessible and remaining true to the traditions. She has been involved in several collaborations and still plays live, but there are few albums. Nazar is her most recent, but I’m listening to her 2008 album Kulak Misafiri (which I am also going to list as a favourite). And when I began research here, I thought I was going to find nothing I would like.

Of course my tastes have changed significantly over the years. I remember my first trip in an Istanbul taxi. It was around 1996. I was boiling hot, the driver wore an armless sweater. The radio was playing music from the middle east. The sound, heat and traffic made me wish I was home. Now, I’d love to experience that again. It was also the first time I was ripped off by a taxi driver. The next time was ripped off I was closer to home (actually outside my house. But we will remain mute on that.)

Not for the first time on this trip I’m confused. Are Minor Empire  from Canadian, too? No matter, they are damn good. Better than good. Their 2017 album goes on my “favourite list” until I get time to listen more. Quite stunning electronic band.

Neşet Ertaş (1938 – 25 September 2012) was a Turkish folk music singer, lyricist, modern ashik and virtuoso of the traditional Turkish instrument the bağlama. His profession in Turkish is known as halk ozanı, which literally means “folk bard”. Hata Benim is the track on this playlist – but intended as a simple direction to go explore later.

I gave up trying to stick to music from the coast of the Mediterranean a few countries back. Which is well, otherwise I would have missed Ahmet Aslan who comes from a province closer to the Black Sea than the Mediterranean. Born in Tunceli in 1968. It’s unlikely that you would find him playing there much these days

“Between 1993-1996 he studied at Istanbul Technical University Conservatory . He has been living in Germany since 1996. Between 2008 and 2012 he completed his education at Rotterdam World Music Academy .” [YouTube]

Erkan Oğur isn’t my sort of thing, but I can appreachiate the artistry. I find it a bit dreary and repetitive. A pioneer of fretless guitars, he invented the first fretless classical guitar in 1976 compositions combining the sounds of Turkish folk music and classical music with the ancient traditional music

There are a lot more musicians and bands on the playlist than I don’t need or want to comment on here. It’s about time rather than dis-interest. As usual, I encourage you to take these notes and playlist as a starting point for your own explorations.

During this part of the voyage en musique, I have reached my half way point and crossed from Europe in Asia over a modern beautifully lit bridge. I have been on this journey for a year and a few days. And plenty more to come.