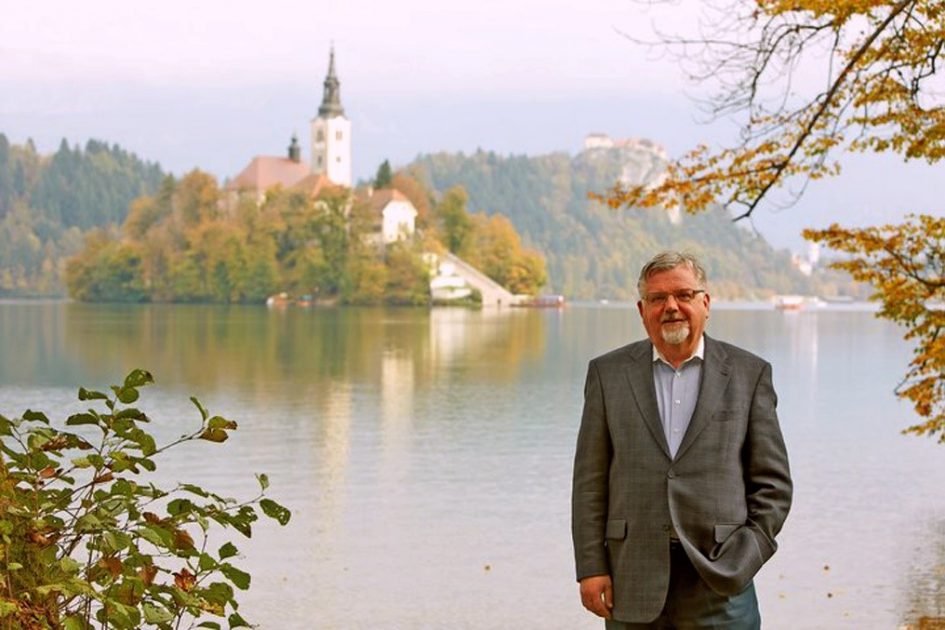 Please note: this is the 2018 edition. For the book to have relevance, it needs to be written in Bled or soon after a visit. but as I can’t be there in 2019, I’m happy to provide this to anyone interested with the advisory note that parts may well be out of date. You can download the PDF from this page.

Profile – Janez Fajfar, the man who represents Bled to the world and at home.

For more than 10 years, Janez Fajfar has been mayor of Bled, the Župan. Apart from his formal duties as the person who runs the town and plans its development, Janez can be seen at almost every event throughout the year, often welcoming tourists and

VIPs. Sometimes he even goes back to his teenage years as a tour a tour guide and picks up the microphone to give a commentary as special guests are taken around town.

When we have a special guest or just for fun I put on my burgundy coat with the black hare collar and fur cap with a peacock feather and the shiny mayor’s chain, of course. Groups from the Far East drop by, all wanting a picture with me and my costume.  I have to address numberless delegations and groups and give them a short talk on the past and present of Bled, if possible in a humorous way.

Last year I enjoyed a lot the meeting with Bartholomeus of Constantinople, the world chief of the Eastern Orthodox Church. The most entertaining was the visit of the Spanish royal family, Queen Sofia asked her husband, King Juan Carlos to make a photo. The digital camera just came out, so he was not yet used to it. His royal spouse said to him as any other wife would do: “Is it even this you can’t make?”

Before having my present post, I used to run Hotel Vila Bled, once Tito’s mansion at the Lake Bled. The government opened it as a hotel four years after Tito’s death in 1984. I stared as a reception manager and advanced to the manager in some years. In 1987 Vila Bled was accepted into the nicest hotel chain of the

world, Relais & Châteaux. Our clientele was fabulous, very few snobs, mostly good old money, well behaved and respectful. Those who came to show off normally came just once, to the joy of the real ones. The City of London liked us a lot; I was even made a freeman in 2004.

We liked it a lot when Tito turned up with some exotic president or a royal. The school was out, the teachers sorted us along the main road, we got one of those colourful paper flags to wave when

the endless line of the limousines passed by. The handles of the flags were the best materials for arrows for our cowboy and Indians battles.

Insider Knowledge:
What is the best thing you can do or see in Bled that tourists usually miss? What is the insider’s secret about Bled?

Walking or taking a buggy ride through the nearby villages, climbing up Osojnica for the incredible view. Triglav National Park Information Centre.