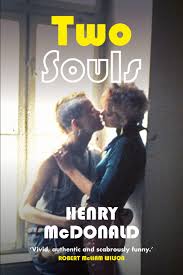 Henry McDonald’s second novel Two Souls tells the story of four people, teenagers about to embark on adulthood, how their lives intertwine, spark and eventually catch fire. As you scan the pages the words and images scorch your eyes and into your imagination. As when you see something truly horrific of TV, whether a drama or real life, you are forced to turn your eyes away. More than once I had to look away from the page.

More details about that, here.

The four main characters experience the summer of punk, the spring of football hooliganism and the series of betrayals that set their lives into partly predictable and often unpredictable paths, all set to a background of David Bowie’s Low, the Fall and the Buzzcock’s good stuff.

The narrator Robert “Robbie Ruin” McManus describes the relationship with his closest friend Padre Pio McCann who is probably clinically psychopathic. Ruin’s punk cousin is Rex Mundi whose family had been burned out of their east Belfast home some years before. They left to live in England but now back with his English accent and support for Brighton and Hove Albion. Then there is Sabine. It is with Sabine that the narrator spends “an Astral Weeks summer” that will change all their lives. Not for the better.

Four leading characters, but two souls. You would be mistaken to think this refers to the lovers at the centre of the story, but McDonald quotes Faust: Two souls, alas, are housed within my breast, And each will wrestle for the mastery there.

Envy, jealousy, treachery and vengeance as are bottles of QC and Mundy’s (I had forgotten Mundy’s, that market now saturated by Buckfast), vodka, dope, random sexual activity, horrific violence makes this sound like a depressing dark story. It is dark, it is depressing at times, but it manages to command a highly emotional response. I got angry with all the leading characters at least once reading the book. I laughed a few times and once, had to put the book down and walk away.

It wasn’t long until I returned. There is a linear story telling here, but there are at least three arcs broken into what Henry described when I met him at Falls Road Library as “pulses”. The three key stories.

Other important characters are Robbie’s communist father listening to Radio Moscow in the kitchen and spending Saturday afternoons with his best mate drinking bottles on Guinness and betting his pay away. His dead mother is there as is Padre Pio’s mother. And others who lose blood, lives and freedom.

The divided city Belfast is a character. The streets of the city are as important as any person, and the navigation around town to avoid the other’s territory, in and out of the “ring of steel”. And David Bowie is important. The other divided city Berlin is a theme. The RAF, Red Army Faction, the West German militant organization founded in 1970 has a counterpart Red Army Faction in Belfast, the supporters of Cliftonville Football Club supporters. Robbie and his friends are violent fanatics.

There are moments that make me smile – memories of Caroline Music plastic carrier bags and Lord Hamill’s burgers, The Pound and The Harp.

This is at times a tough book. Some characters speak a vernacular that outsiders might have difficulty following. I grew up 5 and a half miles and am about 5 years older than the main characters, but these are different worlds to mine. Yet we share The Pound and the Harp, David Bowie’s Low, the Buzzcocks, the Fall, the Sex Pistols. There is one thing missing – yet there are sly references if you know what to look for. Where are Stiff Little Fingers and the Undertones? There is a “perfect cousin” and “suspect device”.

As John Lydon was to say after the spring of hooliganism and before the gaol communications, “This is not a love song”

But I think it is.