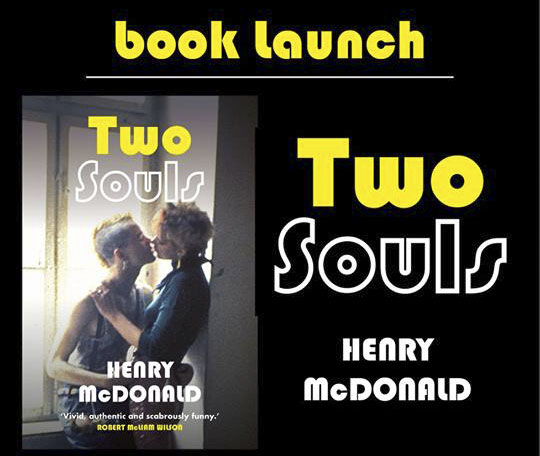 Henry McDonald is a journalist and author. He is probably best known as the Ireland correspondent for the Guardian and the Observer. But there is much more to his thirty year (plus) career.

As an author he has published books about paramilitaries and politicians, he has been a teacher of journalism, a broadcaster and within the last year has moved to work fulltime in the Guardian’s London headquarters.

He’s a football fanatic – Everton is his team across the water. And, like the central character his second novel Two Souls, Robbie McManus , he supports Cliftonville here in Belfast.

Also, like Robbie, Henry grew up in the Markets in Belfast.

He and I have been friends for those 30 years and one of the passions we share is punk rock – particularly if it’s from Belfast, but anywhere, really, it doesn’t matter.

Henry still makes his way home very often and while here to launch the Two Souls novel we met in Cathedral Quarter and sat down in The Dark Horse for coffee and a catch up. I had just finished reading the book and was still reeling from the rawness of the picture Henry painted of life in Summer 78, Spring 79 and September 1994. Punk, Politics, Football and that passion to tell a story. He and Robbie have a lot in common.

Two Souls is published by Merrion Press – if you hear this episode (or read this post) before 12 September, you might want to get to Oh Yeah in Belfast for the launch.

The music from the Free Music Archive is from Blue Dot Sessions.

There are more episodes of this podcast on creativity here on my blog.