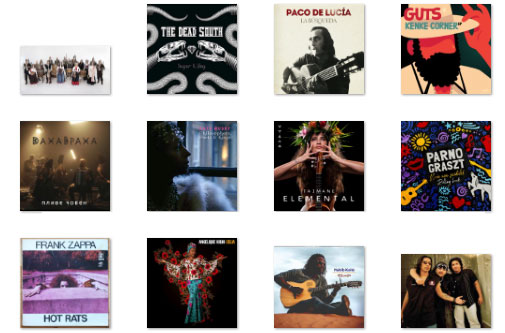 There are no sound files for this episode.

https://habibkoite.com/ Hailing from the musically prolific West African nation of Mali, the guitarist and composer has been named the biggest pop star of the region by Rolling Stone. Straight into the transglobal World Music at No 6 on release this month.

Released 50 years ago this month (10 October)

https://www.parnograszt.hu/ Gypsy music from Hungary Parno Graszt is a Roma music ensemble from Paszab, Hungary founded in 1987. “Parno Grast” means “white horse” in the Romany language, with “graszt” using the Hungarian orthography ‘sz’ for ‘s’. In the Roma culture white is symbol of purity and horse is a symbol of freedom.

From Rock and Classica to traditional Hawaiian music Taimane from Honolulu plays the Uke.

We have had accordions and bagpipes, frame drums from the Mediterranean and Ireland, various African instruments and weird concoxions of traditional and electric from Mongolia … even banjos

Never had a ukulele until now.

Auļi is a Latvian folk/world music band formed in 2003. The band consists of 6 bagpipers, 3 drummers and 1 electric cello player. and Tautumeitas six piece all woman vocal band – played often on the show.

Guts – Guts , pseudonym of Fabrice Henri , born in April 14 , 1971in Boulogne-Billancourt , in the Hauts-de-Seine , is a beatmaker and producer of hip-hop and French fun

https://www.donaldkeller.com/story Don Keller guitarist from Seattle, discovered soukous music in his 20s Forged his musical apprenticeship and skills on YouTube and now working with some of his African heroes – ON this track …

Radio 123, Is a band from the east of Johannesburg in South Africa

Remi Kabaka, Remi Kabaka Sr. is an Afro-rock avant-garde drummer, who laid the initial drum patterns that created the Afro-rock sounds in bands such as Ginger Baker’s Airforce, The Rolling Stones, Steve Winwood’s Traffic, and Paul McCartney’s Band on the Run