Around the World 22 November 2019 – playlist and show notes 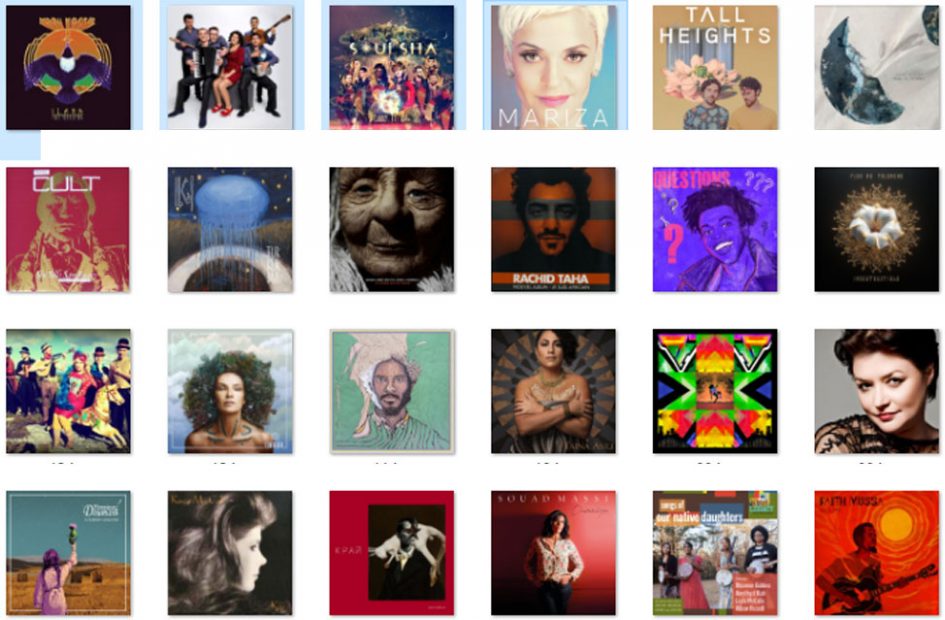 From Brazil. Born in 1939 (80 years old) Dona Onete (She has been called the “Queen of Carimbo”. Onete recorded her first album Feitiço Caboclo when she was 73. Search for a fabulous video of her performing at the Rosklide Festival last year singing from an armchair. Inspirational. https://www.youtube.com/watch?v=RN1g6lz0wMY

Souad Massi (سعاد ماسي), born August 23, 1972, is an Algerian Berber singer, songwriter and guitarist. She began her career performing in the Kabyle political rock band Atakor, before leaving the country following a series of death threats.

Now lives in Paris, and records on Island records and was playing in London’s Jazz Café earlier this week.

Delfin ( born  Dolphin , real name is Andrey Vyacheslavovich Lysikov , born September 29, 1971 ) is a Russian poet and musician . Former member and songwriter of the hip-hop trio “ Bachelor Party ”, the group “ Oak Gaai ” and the project “ Misha Dolphins ”. He is better known for his solo project of the same name. Been making music professionally since 1989 when he was 18

Formed in 2011 in Nicosia Cyprus. Their third album with the symbolic name ‘Angathin’ (2018) – which translates as ‘thorn’ – addresses more than ever, the political, social and activist concerns and sensitivities of the group members and it is a call for rebellion against corruption, racism and injustice.

Maja Milinkovic is a fado singer and songwriter with beautiful, charismatic and powerful voice.

She was born in Sarajevo (Bosnia and Herzegovina) and graduated at the Music Academy in Sarajevo. She began singing at a very early age, plays the piano and guitar and works as singer, songwriter, composer and music arranger.

“Thought in Casablanca, conceived in Paris and recorded in Berlin,  Daba  Oum’s new album transpires the experience of a woman artist of the world.“ http://oum.ma/

The last ten years has seen them produce, promote and preserve the World Music scene in Northern Ireland, introducing live audiences to new music and cultures in addition to working within communities through interactive music performances and workshops. The group work hand in hand with organisations such as LUXe Processional Spectacle Theatre, WOMAD N.I. and Beyond Skin N.I.

This week get a Grammy nomination for Best Latin Rock, Urban or Alternative Album.

From his breakout performance on Stendhal 2019’s main stage to two nominations and another stellar performance at this year’s NI Music Prize, he’s went from a cult favourite act to a household name amongst the NI Music community. His most recent release, ‘Questions’, sees the rapper take from his long list of influences and delicately put his own spin on them.

With aspects of afrobeat, funk, rap and jazz playing major roles in this song, it’s another strong release for the NI artist.

Recorded before his death in 2018, the 16th and final solo album of Rachid Taha cannot escape the shadow of his loss. Born in Algeria, raised in France, but a citizen of rock’n’roll, Taha pogoed over boundaries, torching genres as he went. It’s fitting that the last album from a key player in Damon Albarn’s early Africa Express lineups should incorporate pan-African zeal.

Hannah James & The JigDoll Ensemble     Will We Dance?  The Woman and Her Words

1985 – Just about the finish at 30th Anniversary tour in Britain

Tall Heights is an electrofolk duo based in Boston, MA. The group formed in 2009 and consists of singer/guitarist Tim Harrington and singer/cellist Paul Wright. Recent touring has also featured percussionist/singer Paul Dumas. Their albums include Man of Stone and Neptune, with their third album Pretty Colors For Your Actions releasing October 2018 on Sony Masterworks.