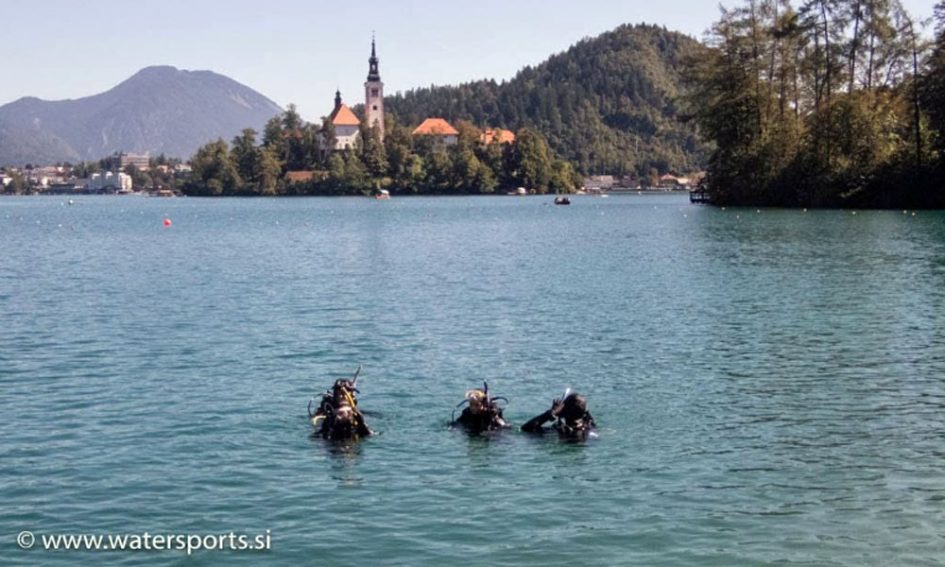 Matjaž Repnik has been teaching diving at Lake Bled for about three years. He and other enthusiasts also participate in the annual lake clean up. When I spoke to him in Mlino, near the pletna pier over a few bottles of Laško, he was preparing to pack up to go home after a long day in and on the lake.

Until 2010 Matjaž was working in IT in Radovljica a town with a beautiful old centre about 15 minutes away from Bled. He swapped his desk job for diving and is now a full-time instructor working in Bled, on the Slovenia coast and Croatia. During the winter in 2016 and 2017 he worked in Sri Lanka. Matjaž has made over 1,000 dives and is in (and under) the water six times a week during the summer.

“Lake Bled has around six different diving spots. It is biologically diverse and interesting,” Matjaž tells me. As we stood at the lake shore he talks about the variety of fish and fauna under the water. “There is something like eighteen different species in the lake.

“You will find carp, catfish, pike, zander, trout, perch and there are smaller species, too as well as the underwater plants.” Almost every day of the year you will see anglers fishing from the shore, most staying awake overnight and making early morning catches.”

The biggest fish found in the lake was a common carp weighted 30.7 kilograms and was about 2 metres long.
The water lilies are just beginning to come alive on the surface of the water as we look out across the lake. “The visibility is pretty good at about 3 metres. We dive only to 10 metres. But the lake goes down to 30 metres where visibility is zero and temperature is only 6 degrees.”

“The Discover Scuba Diving course is an elementary introduction to scuba diving. I take only two people at a time. They get a taste of the excitement and the experience. They won’t see everything hidden under the surface in one or two dives, but it does give novices the opportunity to taste the experience.”

Divers also help keep the lake clean. “Twice in its history, Lake Bled has been close to death, almost killed off by algae.” Significant steps were taken a few decades ago to ensure the health of the lake. “Last Saturday,” says Matjaž, “Was Cleaning Day for the lake. Divers came from all over Slovenia. I was helping clean just where we are now in Mlino.”

What did they find down there? “I couldn’t bring out part of a car engine! There was an old toilet and crockery. Each diver brought out a huge bag of rubbish.”

Sadly, even though there is a medieval castle and an ancient church on Lake Bled and a civilisation of over 1000 years, Matjaž has not yet found any lost treasure. About a centimetre of silt forms on the bottom of the lake every year and over time any “treasures” have either been found or covered up by nature. Or perhaps were never there at all.

Watching a film about diving changed his career path and his life. “In the village where I am from in the Culture Centre, people give photo presentations and talks about places they have been. One guy had been to Mexico and had made an underwater movie. As I watched, I saw the bubbles created by the divers breathing apparatus. I had never seen anything like that before. I was inspired by those bubbles.”

Learning to Dive with Matjaž

“I am a PADI instructor and a course here in Bled or in Slovenia is recognised anywhere in the world. The Discover Scuba Diving course is a one-time event, but if someone wants to do something more advanced I can do that with them. Next level is an Open Water Course. You can come here and do that in three or four days. There are dives and skills and safety training. And I teach you to navigate under water with a compass. After that you can dive up to 18 metres anywhere in the world. If you are already a diver and are looking for a dive buddy, if you bring your certification we can dive together.

“Today I was running a Rescue Course and some tourists from the Netherlands stopped when they saw the equipment and they wanted to know about diving in Lake Bled. I explained the way I am explaining to you. So now I am going to be organising a dive for them.”

For more information or make a booking you can contact Matjaž via his website or email him ahead of your visit to Slovenia at info@watersports.si