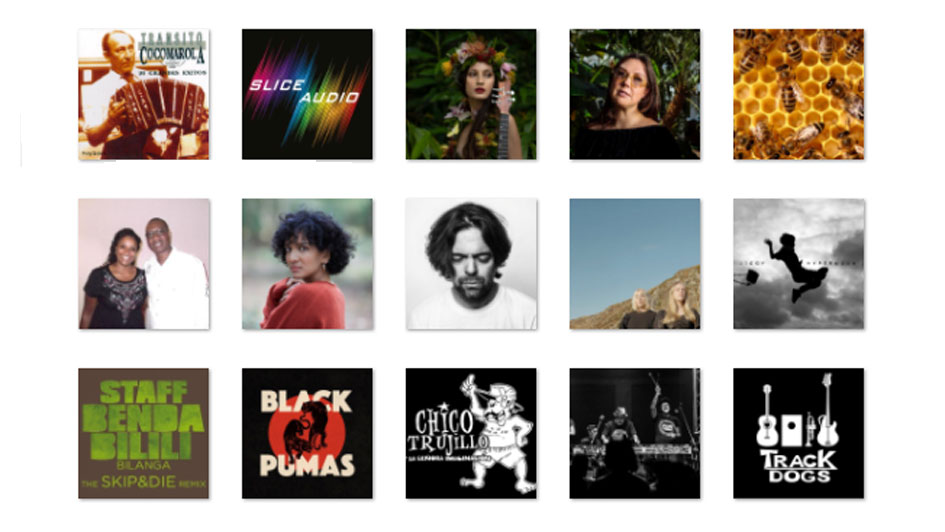 Around the World is available live on Slice Audio every Friday from 8:00 pm to 10:00 pm

This is the planned running order – but you never know what will happen.

You can also hear the music here:

Some videos of tonights artists

2 Flag of Ireland 1 Flag of United Kingdom 1 Flag of United States based in Madrid, their album Fire on the rails has been out for a month or two. There’s a new video to go with that track – you’ll find that on their twitter feed and on my blog alsog with a 30 minute concert broadcast on Spanish TV.

Son Rompe Pera from Mexico City is currently made up of five musicians, (conga, percussion, güiro, drums, guitar, bass and marimba) playing with Chico Trujillo are a New cumbia band.

Arabnormal is a Belgian experimental rock band founded by Younes Faltakh (The Hickey Underworld) and Niek Meul (Das Pop). Birthed in post-punk, heavily infused by Eastern psychedelica, and described by record label PIAS as alternative world music, most refer to it as ‘a manically zonked-out flying carpet ride’.

Black Pumas is an American psychedelic soul band based in Austin, Texas, led by singer Eric Burton and guitarist/producer Adrian Quesada. The group received its first Grammy Award nomination in 2020 for Best New Artist at the 62nd awards

Welcome back to the show. Last week at this time it all went wrong – Friday the 13th and all that – and I had to abandon the live show and automate all the music. One track I played but didn’t get the chance to talk about was the next one.

Saigon Soul Revival has been on a quest to reawaken the raw, enchanting sounds of 1960s and 70s Vietnam; a time when passionate music resonated in Saigon’s streets and clubs with messages of love, heartache, hope and freedom.

A group of street musicians in the Democratic Republic of the Congo, 4 of the on stage band are wheelchair users. They had polio when they were young

They used to live around the grounds of the zoo in the country’s capital city, Kinshasa, and play music which is rooted in soukous, with elements of rhythm and blues and reggae. The core i the 4 plus a younger rhythm section consisting of abandoned street children who were taken under the protection of the older members of the band.

It looked like they had split in 2013 after their second album But this new album was released at the end of last year with what appears to be the original core 4 lineup https://www.roughtrade.com/gb/staff-benda-bilili/effacer-le-tableau

The group’s name translates roughly from Lingala as “look beyond appearances”.

ON International Women’s day a few weeks ago the Oh Yeah centre in Belfast had an event for young women musicians. Now, If you don’t know, Oh Yeah does many things and working with very young not even yet emerging talent is one of their most important roles.

And I was talking to Charlotte a few days later and she told me that Sasha had come to Oh Yeah a few months ago with a ukulele and some songs and had since built a band around her.

She had me at “ukulele”.

Sasha hasn’t released anything yet but you can find that track on her Soundcloud site.