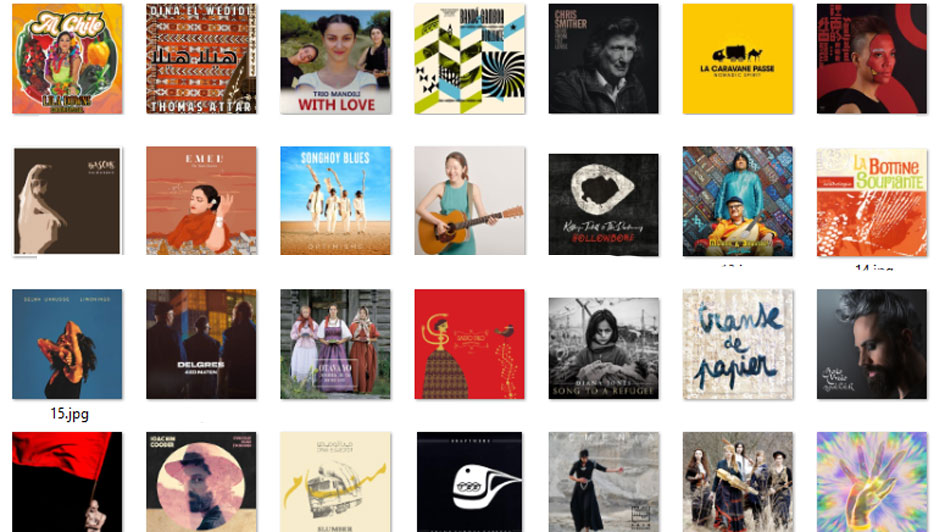 She has been recording for more than 25 years and recorded almost 20 albums in that time. Lila Downs from Mexico and a track from her most recent album Al Chile – To Chile

From Cairo Dina el Wedidi – from Paris. Los Angeles and New York, Thomas Attar Bellier. The single is Hila Hila. In part two of the show I’ll be playing something else – something very different from Dina El Wedidi.

This is the first time playing music from Georgia. Trio Mandili.

Three young women from Georgia – at the intersection of Europe and Asia and a former Soviet republic. They are something of a YouTube sensation there. The three of them walking through villages and the countryside singing in close harmony with one playing a three string lute like instrument called a pandori. They’ve released a couple of albums and that Apareka from their first album With Love. The first video has had 6.5 m view and a  cold snowy winter version has had 5.5 m views.

Bandé-Gamboa are drawn from bands in Guiné-Bissau and Cabo Verde. Their album Horizonte is a project to revive classics and rarities from both countries. That was pay de Be-silon.

Born in Florida during WW2 and grew up in New Orleans – Chris Smither – More from the Levee is an album recommended by someone who listens to the show – and if you know of some interesting music from unexpected places that I should listen to and maybe play leave me a note on the comments section of my blog davysims.com

Sauljaljui         Thanks to All My Buds Insides Revealed

Then from Taiwan Sauljaljui who dips into traditional music from the region in some of her music and as you heard mixing it with Latin American music. Thanks to All My Buds from Insides Revealed

Basork – however – are from Derry.

New music for contemporary dance by Basork and Zoe Ramsey of Echo Echo Ensemble – Search for the video on YouTube to find out more and see the performance.

Often referred to as the “Voice of Tunisian Revolution” due to her song “Kelmti Horra” (must play that next week). She performed at the 2015 Nobel Peace Prize Award collaborates with designers like John Paul Gauliter,

The Tunis Diaries is her third album that was Malkit.

There is a festival of Korean music online this month. It is usually an annual festival in London, but for obvious reasons … I’ve two Korean musicians tonight – on in each hour, But I don’t think either are involved in the festival. This is Gonne Choi.

Marcus is a french trio who met Pakistani singer and musician Shahzad Santoo Khan by chance on social media around five years ago. They have been recording and touring ever since. I was due to see them a couple of summers ago – but that wasn’t to happen. They released that new album Jana Ana a few weeks ago and that track is Kamli.

This is part 2 with French band merging Creole, Haiti, Tuareg, and delta blues. They are Delgres and Quatre Ed Maten is their current single –

Octova Yo are sort of the Horslips of St Petersburg – This is Fist Fighting Rhymes.

And a very different band from St Petersburg later in the show. Music also from Germany, Egypt, Yemen, Korean Mexico and Czechia And from Greece Gadjo Dilo from Greece.

Song To A Refugee is Diana Jones’s 6th solo recording. It sets out to give voice to the stories of asylum seekers world-wide. ON that track she is joined by Peggy Seeger, Richard Thompson and Steve Earle.

Unexpectedly France seems to be a recurring theme on the show tonight – particularly with a north African crossover. That’s Lo’jo from Paris – they have been together since 1982 and been recording since ’93. Steeped in North African Music and that is a new single from them.

I’m very tempted to do a whole show about trains – It wouldn’t be hard to fill and there are a lot of great songs. That was in order …