Tallinn Music Week moves to Narva – and so do I

The train takes around two and a half hours to make the journey from the capital of Estonia to the border town Narva. If the train continued, a few hours later it would arrive in St Petersburg.

A few days before the Tallinn Music Week programme was announced, Russia invaded Ukraine after several years of occupation of the east of the country. This was prefaced by a significant strategy of anti-Ukraine propaganda by the Kremlin in Russia and in the east of Ukraine. “TMW will take place in Tallinn and Narva as a statement of solidarity: each of us in Europe is as safe and strong as our border states and communities.” The TMW website announced soon after the invasion. “We would like to invite you on a journey with us. We hope that it will be a unifying and insightful experience – proof of music and culture creating collaboration and solidarity. We are all connected. Unity is our defence.”

Helen Sildna, the founder of Tallinn Music Week added: “Our thoughts are with everyone in Ukraine, fighting for their lives in an unjust war by the Russian regime, as well as with artists and partners in Russia, many of them risking their livelihoods by protesting on the streets.”

As my taxi driver takes me into Tallinn from the airport he tells me about the anti-Estonian propaganda currently broadcast in the eastern Russian speaking part of Estonia. Narva is probably the most important town in the area.

Villup – the driver’s name – is about 10 years younger than me. He grew up in Soviet times, served in the Russian navy as a teenage conscript in Kaliningrad – still today a Russian enclave and port between Poland and Lithuania. And Villup is concerned, other Estonians are concerned. They hear the propaganda echoes in Ukraine in the propaganda in Estonia.
In the streets of old town Tallinn there are Ukrainian flags. I’ve seen the same in Dublin and Ljubljana. They hang from the embassies around town, from shops and other buildings. They share flagpoles with the EU flag, the Estonian flag, the city flag. The difference between here and Ljubljana and Dublin is there is a former KGB prison here – now a museum – just a short walk from the Russian embassy. There are lots of Ukraine flags at the Russian embassy, but they were not placed there by the staff there. but by the protesters who have erected a permanent protest. There are some photographs below.

Tallinn Music Week attracts musicians from all over the Nordic region and beyond. In the past that has included both Russia and Ukraine. This year Ivan Dorn performed at the opening concert and other Ukrainian artists will play and stay on in Estonia contributing to the culture of the country.

Looking over the border at Ivangorod Fortress

After the invasion of Ukraine, a few days before the TMW programme was announced, the organisers decided to move the whole festival to the Russian border, to organise street events, art events, evening concerts. I’m on my way to spend just a few hours. The decision to move the event was made after I had booked flights. I’ll walk around and take in the atmosphere before spending an hour in the The Jesus Resurrection Orthodox Cathederal for a performance of Arvo Pärt’s “Da pacem Domine” with the Estonian Philharmonic Chamber Choir, conducted by Tõnu Kaljuste. Then back on the train.

How can anyone describe this performance? It is the first time the cathedral has been open for a public event, it is packed and obviously most of the people attending are not of this church. Men wearing hats (just one example) general lack of reverence in what is a deeply spiritual place. Even if you are not a believer, a little more respect should be observed.

Then silence as the most beautiful and haunting music is heard. For forty-five minutes, just the choir – no applause to interrupt the atmosphere. And it’s over.
Five minutes to the train station and the long journey back to Tallinn. 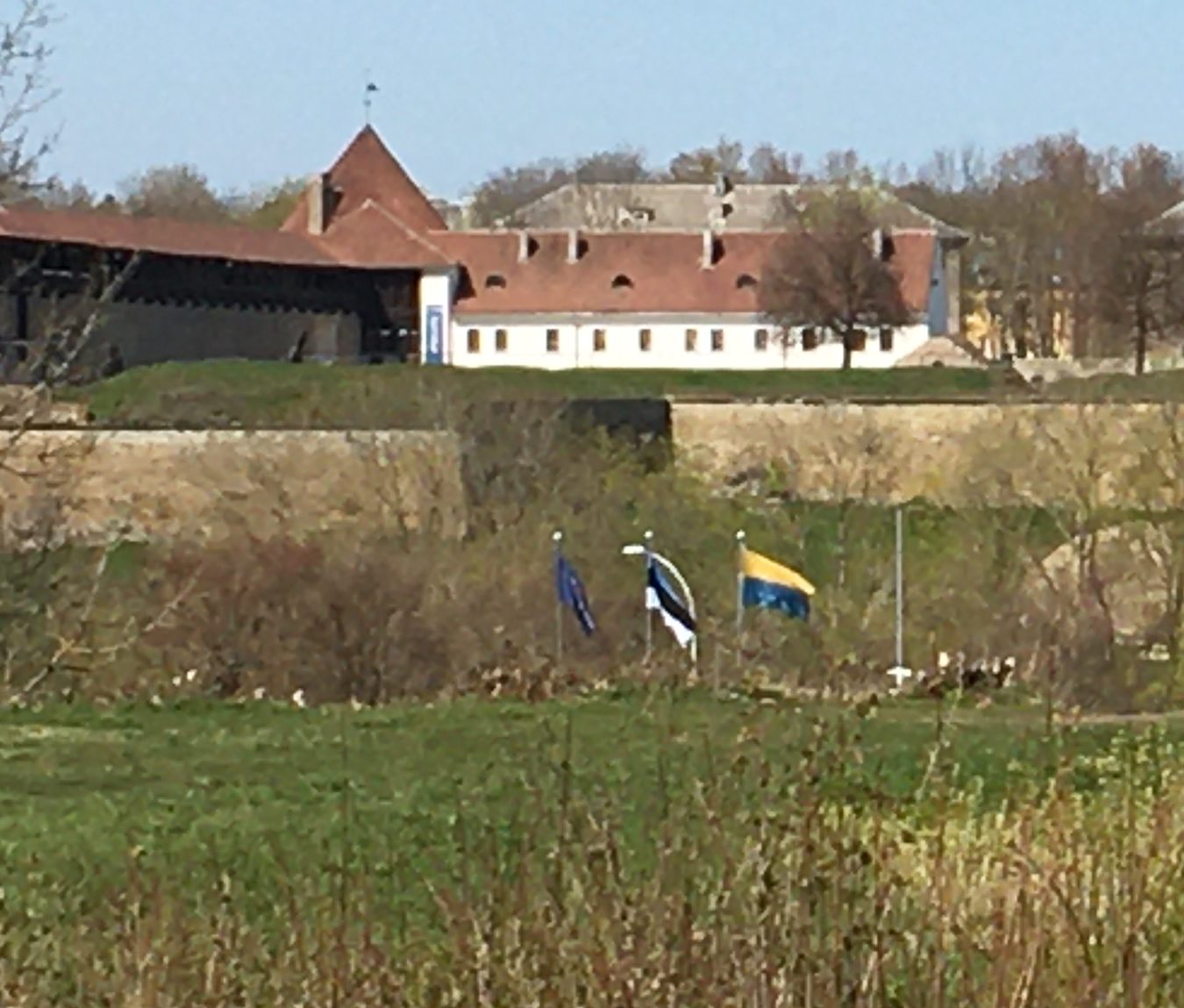 Near the crossing point over the Narva River where the European, Estonian, and Ukrainian flags fly together.

The Friendship Bridge over the River Narva linking the road from Tallinn to St. Petersburg.