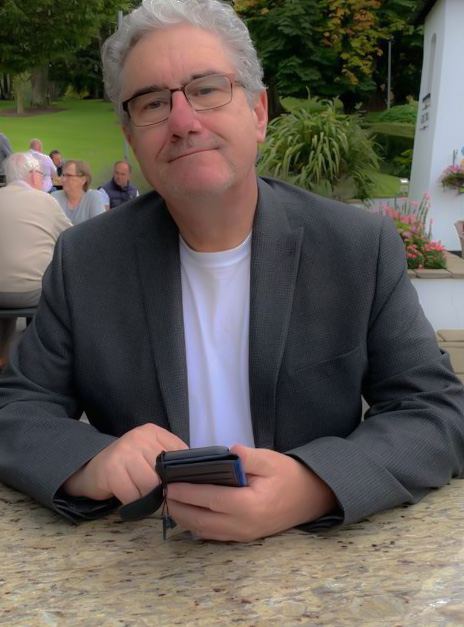 Starting his career in 1979 at Downtown Radio he became known for supporting new bands including some who would become the best known in punk and new wave. He went on to develop and produce The Bottom Line (30+ years later still broadcasting as Across the Line) on BBC Radio Ulster. He also held senior production positions in UK wide BBC Radios 1 – the national popular music station for younger people and Radio 4 the speech-based station.

In 1999 Davy was the first producer in BBC NI’s Online service going on to be Editor New Media until 2008 leading the production team making content for web, mobile, interactive TV and digital communities.

Since leaving the BBC, Davy has been a lecturer in radio production, and online analytics in Dublin Business School, has worked with the Broadcasting Authority of Ireland on their Sound and Vision scheme. He spent time in Slovenia occasionally lecturing and working on digital tourism.

He spends most of his time making a weekly radio show playing music from around the world. The show is a mix of passion, work and hobby and is carried by 5 radio stations in Northern Ireland. It is also available without charge to any station that wants to carry it.

He still maintains a training and consulting brief with community and voluntary organisations developing media skills and podcast production.

He is director of two recent start-ups, Belfast DAB Plus and Enterprise Media Ireland, as well as the long standing Argyle Business Centre.

I am Davy Sims, broadcaster, podcaster, lecturer, writer and author. I livce in Northern Ireland but spend time in Slovenia when ever possible. I also do some work in Dublin, Ireland.

I have written books on the lake resort Bled in Slovenia, and about podcast production. You can find those books here [Bled, Slovenia] and  here [podcasting]

After decades away from being behind the microphone, I’m presenting a world music show on internet radio station Slice Audio, and community stations Bangor FM, Down Community Radio, Lisburn’s 98 FM, and Ferry FM (more here and playlists and so on here). The show ison Slice and Ferry FM from 22h00 to midnight  (local time) on Sundays, repeated on Slice at 04h00 Wednesdays.

The show is also broadcast by Bangor Radio, Lisburn’s 98 and Down Community Radio on Tuesdays at 7h00 pm Tuesdays.

I have been leading training with community organisations to help them produce their own podcasts and doing the occasional episode myself here here and here.

I began broadcasting in 1978 as a presenter on Downtown Radio where I was best known for championing young rock bands from Ireland, north and south. I contributed to the early development of the Youth Programmes genre. In 1986 with a move to BBC Radio Ulster where I founded The Bottom Line (now 30+ years on still going as Across The Line). Within three years I was off to London for BBC Radios 1 and 4 producing social action programmes and documentaries. As Chief Producer I led Youth Programmes department before returning to Belfast to work in current affairs, religious affairs, magazine and music programmes before becoming the first producer in BBC Northern Ireland Online. From 2001 to 2008 was Editor New Media leading a team producing web, interactive TV, mobile and community outreach.

Since 2008 I have worked in media and technology. In recent years,  I spent considerable amount of time in Slovenia consulting on digital tourism, social media and emerging platforms. I have taught both Online Analytics and Radio Production in Dublin Business School to BA Journalism students and have been a guest lecturer in University of Ljubljana. Until recently I worked with the Broadcasting Authority for Ireland on their Sound and Vision scheme.

I have won awards for radio and web production in Belfast, London, Dublin and New York.

Between 2011 and 2013  as Head of Social Media in the youth activism project Public Achievement I led the media training project WIMPS (Where is my public servant?)

I am a non-executive director of Argyle Business Centre on Belfast’s Shankill Road and, and of two new startups, Belfast DAB Plus and Enterprise Media Ireland. Until its closure in January 2016, I was a director of Achieve Enterprises, the social enterprise arm of Public Achievement.

If you find all that desperately interesting there’s more on LinkedIn.com/in/davysims

I can be contacted through this webform.